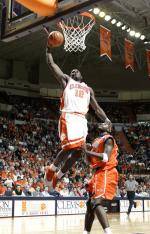 The team that has won the first five minutes of the second halfhas gone on to win eight of the last nine games the Tigers haveplayed. That included the most recent game with North Carolina whenthe Tar Heels went on an 11-0 to open the second half. Clemsonreserve guard Vernon Hamilton is a native of Richmond, VA, thefirst scholarship Clemson player from the state of Virginia sinceJo Jo Bethea came to Clemson in 1973. Hamilton struggled atVirginia last year when he made nine turnovers, but came back toscore a career high 19 points on 6-10 shooting in the ACCTournament against the Cavaliers to close his freshman season.Clemson ranks eighth in the nation in steals per game with 10.9 pergame so far this season. Hamilton leads the way with 44 in 17games. His 2.59 steals per game is ahead of the Clemson record of2.43 per game set by Chris Whitney in 1992-93. Oliver Purnell willbe returning to a state where he coached and played for many years.Purnell led Old Dominion to the NCAA Division II championship as asenior in 1974-75. He was an assistant coach at Old Dominion from1975-76 to 1984-85, then was the head coach at Radford for 1988-89through 1990-91 and was the head coach at Old Dominion from 1991-92through 1993-94. Clemson freshman Cheyenne Moore is coming off hisbest game as a Clemson Tiger. The 6-6 forward scored had a seasonhigh 14 points on 5-10 shooting against North Carolina. Moore’sgame included 4-7 three-point shooting. He had not had more thantwo threre-point goals in any game heading into Wednesday night’sgame with the Tar Heels. Clemson is in the middle of a stretch inwhich it must play four of five games on the road. Clemson is 1-2so far on the road this year with the victory at Florida State.Clemson has won just four of its last 51 ACC road games. One ofthose wins was at Virginia in 2002-03. That is Clemson’s only winat Virginia since 1996-97. Sharrod Ford has scored in doublefigures in three straight games and six of his last seven. He hasscored in double figures in 10 of his last 11 ACC road games and isaveraging 15 points per game in his last 11 ACC road games. Clemsonheld North Carolina to 27 points in the first half last Wednesday,the Tar Heel’s fewest points in a half since the opening half ofthe year when Santa Clara held them to 26/ Freshman Cliff Hammondsis second among all conference freshmen in scoring with a 9.9average. The native of Cairo, GA who leads the team in playing timehad a 3.25 GPA in architecture in his first semester at Clemson.