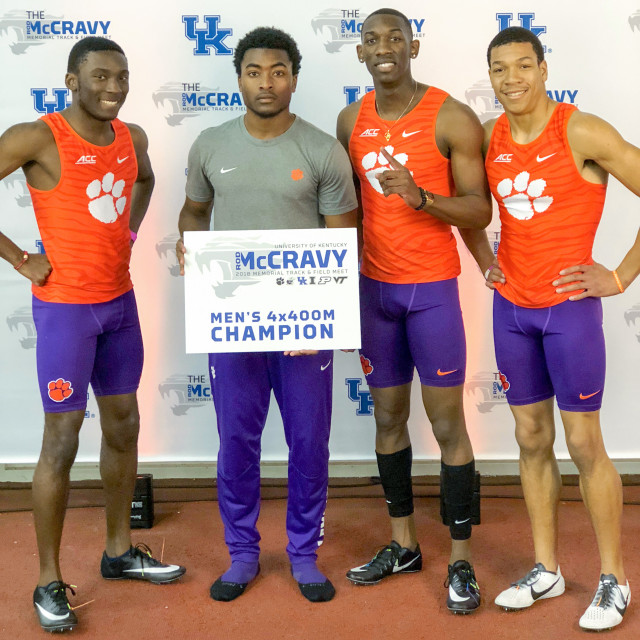 LEXINGTON, Ky. – Cordell Lamb, Deonte Tolbert, John Lewis and Jeffrey Green posted a time of 3:08.80 to win the men’s 4x400m relay in Saturday’s final event of Kentucky’s Rod McCravy Memorial. Their time in the event is the third-fastest men’s 4×400 relay time by a Tiger unit this season. The meet, which was held at the Nutter Field House, marks the first time this season that Clemson has competed on a non-banked track.

On the women’s side, Olivia James, Kamryn McIntosh, Fellan Ferguson and Kendra Clarke placed second overall in the 4x400m relay. Their time of 3:38.05 is good for the No. 2 time by a Clemson women’s 4x400m relay group this season.

In the 200m dash, Alex Sands placed fourth overall, dashing across the finish line in 21.61 seconds. The sophomore posted the league’s third-fastest time in the event – also at the Ted Nelson Invitational – with time of 21.26.

In the cage, the Tigers saw two personal records fall. Sophomore Grant Voeks’s best heave of 16.61m earned him a fifth-place finish and the No. 7 mark in the ACC. On the women’s side, Grayce French threw for 13.12m for her career best, while placing fifth at Saturday’s meet.

In the women’s weight throw, Danielle Borriello’s best throw of 15.62m set her best mark this season. Borriello finished fifth in the event.

Harleigh White notched seventh in the women’s long jump with a leap of 5.52m, tying her season best, while Maya Hanks PR’d in the event with a distance of 5.08m.

The Tigers’ lone pole vaulter Morgan Allen reached her highest height of the season with mark of 3.78m.

Up next, the Tigers return to the Clemson Indoor Track & Field Complex for the annual Tiger Paw Invite, which is set for Feb. 9-10 (Friday-Saturday). The meet will feature nine ACC teams, nine SEC teams and the USC Trojans. Live results for the Tiger Paw Invite can be accessed on clemsontigers.com.