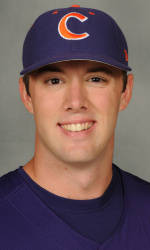 The victory was Jack Leggett’s 1,161th as a head coach, tying him for 16th place on the all-time wins list by a head coach at a Division I school. He tied the late Bill Wilhelm and Norm DeBriyn (Arkansas) on the wins list. Wilhelm totaled 1,161 wins in 36 seasons at Clemson from 1958-93, preceeding Leggett as head coach in Tigertown. Leggett served two seasons (1992,93) as an assistant coach under Wilhelm, who passed away on December 24, 2010.

Coastal Carolina broke a 2-2 tie with two runs in the top of the fourth inning, then the Tigers answered with a run in the bottom of the fourth to narrow the Chanticleers’ lead to 4-3. But neither team scored again until the ninth inning. Will Lamb hit a one-out triple in the ninth inning and scored on Attanasio’s one-out double to left field before McGibbon’s one-out, bases-loaded single to center plated Miller in the 10th inning and gave Clemson its first walkoff hit since 2009.

The Tigers also received a stellar defensive effort from Miller at shortstop, who did not start in the field in the previous 14 games due to a broken finger. He made three stellar defensive plays to rob Chanticleers of groundball hits, while first-baseman Richie Shaffer also made a diving stop of a grounder to rob another Coastal Carolina player of a hit. Neither team committed an error in the game, while Clemson totaled 30 putouts and 18 assists.

David Haselden (2-1) pitched the final 7.0 innings to earn the win. In his career-long outing, he allowed just two hits, no runs, and two walks (one of which was intentional) with three strikeouts in throwing only 72 pitches. During one stretch, Haselden retired 17 of 18 batters, including 10 in a row.

Jordan Coons (1-3), the last of five Chanticleer pitchers, suffered the loss. He yielded two hits and one run in 0.1 innings pitched.

Clemson responded with a run in the bottom of the second inning. Shaffer led off with a single to left field and moved to second on Miller’s single up the middle. Shaffer was retired at third base on Chris Epps’ bunt, then Miller and Epps both stole a base. Spencer Kieboom’s sacrifice fly to left plated Miller.

Coastal Carolina retook the lead in the top of the third inning when Keith Hardwick lofted a home run to left field, his second long ball of the season.

But for the second inning in a row, Clemson answered right back to tie the score in the bottom of the third. John Hinson hit a one-out double down the left-field line. Two batters later, Jeff Schaus lined a two-out single to right field to score Hinson.

In the top of the fourth inning, Bowman led off with another double, this time to right field. Motter followed with a double to left-center to score Bowman, then Frawley drove home Motter with a single up the middle.

Shaffer led off the bottom of the fourth with a triple off the centerfield wall. Two batters later, Shaffer scored on Epps’ groundout to second.

In the ninth inning, Lamb hit a one-out triple to left-center. Attanasio came off the bench and tied the score with a line-drive double to left field to score Lamb. After Hinson was intentionally walked, Phil Pohl grounded out to the pitcher for out #2 as the two runners moved up a base. Schaus was also intentionally walked to load the bases, but Shaffer fouled out to send the game into extra innings.

Miller led off the 10th inning with a single through the right side, then Epps was hit by a 1-2 pitch. Kieboom struck out when he fouled off a two-strike pitch on an attempted bunt, but Miller and Epps still moved up a base on a wild pitch on the first pitch to Lamb. The Chanticleers decided to intentionally walk Lamb to load the bases with one out, then on a 3-2 pitch to McGibbon, he lined a single to center to score Miller for the winning run.

Clemson will host Western Carolina at Doug Kingsmore Stadium on Wednesday at 6:30 PM.