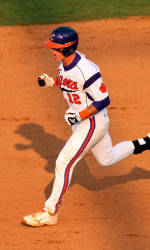 Jon McGibbonlined a three-run walkoff homer over the wall in right-center in the ninth inning to lift Clemson to a 9-7 victory over #1 Florida State in the ACC Tournament in front of 3,282 fans at NewBridge Bank Park on Friday afternoon. The Tigers, who moved to 1-1 in the ACC Tourney and won their third game in four meetings with the top-ranked Seminoles this season, improved to 33-25. The Seminoles, who fell to 0-2 in the ACC Tournament, dropped to 43-14 in 2012.

Florida State scored four runs in the third inning to take a 4-1 lead. Clemson scored a run in the fourth inning and two more runs in the fifth to narrow Florida State’s lead to 5-4. Two two-out singles by Florida State in the top of the eighth inning gave it a 7-4 lead, but Spencer Kieboom’stwo-run single in the bottom of the eighth inning cut its lead to one run again. Two one-out singles in the ninth inning set up McGibbon’s walkoff blast, keeping the Tigers alive for the ACC Tournament title.

McGibbon’s walkoff homer was Clemson’s second in ACC Tournament history and first since April 24, 1981, when Jimmy Keyhit a walkoff solo homer in the 10th inning to give Clemson a 6-5 victory over Wake Forest in Chapel Hill, NC. It was also the Tigers’ 23rd all-time walkoff home run and McGibbon’s second career walkoff hit. McGibbon’s walkoff single in the 10th inning against Coastal Carolina on April 5, 2011 gave the Tigers a 5-4 win.

Freshman righthander Patrick Andrews(2-3) retired all four batters he faced with one strikeout to earn the win.

In the third inning, Jose Brizuela led off with a single to center and moved to second on Sherman Johnson’s groundout to first. Devon Travis lined a 1-2 pitch at third-baseman Richie Shaffer, but he could not come up with the catch and Brizuela scored on the double. James Ramsey followed with a line-drive single to center on a 1-2 pitch to score Travis. Boyd laced a 1-2 pitch to left field for a single, then Stephen McGee walked on four pitches to load the bases. Justin Gonzalez followed with a single through the right side to plate Ramsey. Boyd then scored on a balk to give Florida State a 4-1 lead.

After Clemson got out of a one-out, bases-loaded jam without allowing a run in the top of the fourth inning, the Tigers scored a run in the bottom of the fourth inning. Phil Pohlled off with a double to left-center on a 1-2 pitch and scored two batters later on McGibbon’s one-out double down the right-field line. McGibbon’s two-bagger broke Clemson’s 0-for-28 slump with runners in scoring position over a five-game span.

Gonzalez led off the top of the fifth inning with an opposite-field home run to right field, his eighth long ball of the season.

The Seminoles added two runs to their lead in the top of the eighth inning. Johnson and Travis drew two-out walks. Ramsey belted a 2-2 pitch off the wall in right field for a single to score Johnson. Boyd followed with a line-drive single to left field on a 1-2 pitch to plate Travis.

In the bottom of the eighth inning, pinch-hitter Joe Costigan led off with a bloop single to left field and McGibbon followed with a line-drive single to center. Stolz reached on a fielder’s choice as pinch-runner Tyler Slatonwas retired at third base, then Felder walked to load the bases. Kieboom bounced a single through the left side to score McGibbon and Stolz. However, the next two Tigers were retired to keep Florida State ahead 7-6.

Pohl grounded an 0-2 pitch up the middle for a one-out single in the ninth inning. Pinch-hitter Mike Dunsterreached on an infield single to first. McGibbon then belted an 0-1 breaking ball over the wall in right-center for a three-run homer, his fifth long ball of the season and second of the ACC Tournament.

McGibbon led Clemson’s 11-hit attack by going 3-for-5 with a homer, double, four RBIs, and two runs. Kieboom went 2-for-4 with two RBIs, while Pohl added two hits and a run.

Boyd went 3-for-5 with an RBI to lead Florida State, who also totaled 11 hits. Ramsey and Gonzalez both added two hits and two RBIs.

The win over the top-ranked Seminoles was Clemson’s third over a #1-ranked team in 2012 (all against Florida State) and 15th in school history.