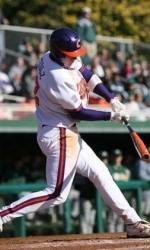 Mike McGee’s three-run homer with two outs in the ninth inning lifted #24 Florida State to a 7-4 win over #18 Clemson in front of 5,125 fans at Dick Howser Stadium on Sunday. McGee’s second home run of the game in the ninth inning came after the Seminoles tied the score 4-4 earlier in the frame on Stephen Cardullo’s sacrifice fly in foul territory. The Seminoles, who won the series 2-1, improved to 11-8 overall and 3-4 in ACC play. Clemson dropped to 14-6 overall and 5-4 in the ACC.

John Gast (2-2) earned the win in relief, as he pitched a perfect inning with a strikeout. McGee, Florida State’s starting pitcher as well, allowed three runs (two earned) on six hits in 6.0 innings pitched. Three Seminole pitchers combined to walk eight batters, but Clemson only scored four of its 16 baserunners in the game. Tiger reliever Justin Sarratt (3-1) suffered the loss, as he allowed the final three runs.

The Tigers jumped out to a 1-0 lead in the first inning. Brad Miller led off with a walk and went to third on Mike Freeman’s single through the right side. Ben Paulsen grounded into a double play, but Miller scored on the play.

The Seminoles evened the score in the second inning. D’Vontrey Richardson drew a two-out walk and advanced to second on a balk. Ruairi O’Connor then hit a single to center to score Richardson.

McGee gave Florida State the lead when he hit a long solo home run to left field with two outs in the fourth inning.

Clemson regained the lead in the sixth inning. Kyle Parker reached on a one-out infield single and went to second two batters later on Will Lamb’s two-out single to left. Jason Stolz then lined a single off the glove of Cardullo at short to score Parker and Lamb advanced to third. O’Connor’s throw to third base went into the Tiger dugout, allowing Lamb to score.

After Clemson left the bases loaded in the top of the seventh inning, the Seminoles tied the score in the bottom of the seventh. Parker Brunelle led off with a single through the right side and went to third on a throwing error on a failed pickoff attempt. Tyler Holt’s sacrifice fly to right plated Brunelle. Stuart Tapley followed with a drive to center, the deepest part of the ballpark, but Addison Johnson made an over-the-shoulder catch on the warning track for out #2. Another outstanding defensive play, this time by Freeman at second on a groundball up the middle, off the bat of Jason Stidham kept the score tied.

In the eighth inning, Clemson manufactured a run to take a 4-3 lead. Stolz led off with a walk and advanced to second on John Nester’s sacrifice bunt. After Stolz stole third base, Johnson laid down a suicide squeeze bunt with two strikes to score Stolz.

In the ninth inning, pinch-hitter Tommy Oravetz led off with a single through the left side and Sarratt entered the game on the mound for the Tigers. Holt walked on a 3-2 pitch and Cardullo advanced both runners with a sacrifice bunt. Tapley followed with a walk after being down 0-2 in the count to load the bases. Stidham then hit a high flyball in foul territory, where left-fielder Jeff Schaus made a running catch. However, pinch-runner James Ramsey scored the tying run on the sacrifice fly. With two outs, McGee then blasted a 1-2 pitch over the right-field fence for an opposite-field three-run homer and the walkoff win. It was McGee’s second homer of the game and fourth of the season.

McGee paced Florida State’s 12-hit attack by going 3-for-5 with two homers and four RBIs. Stolz went 2-for-3 with a run and RBI for Clemson, who had eight hits in the game.