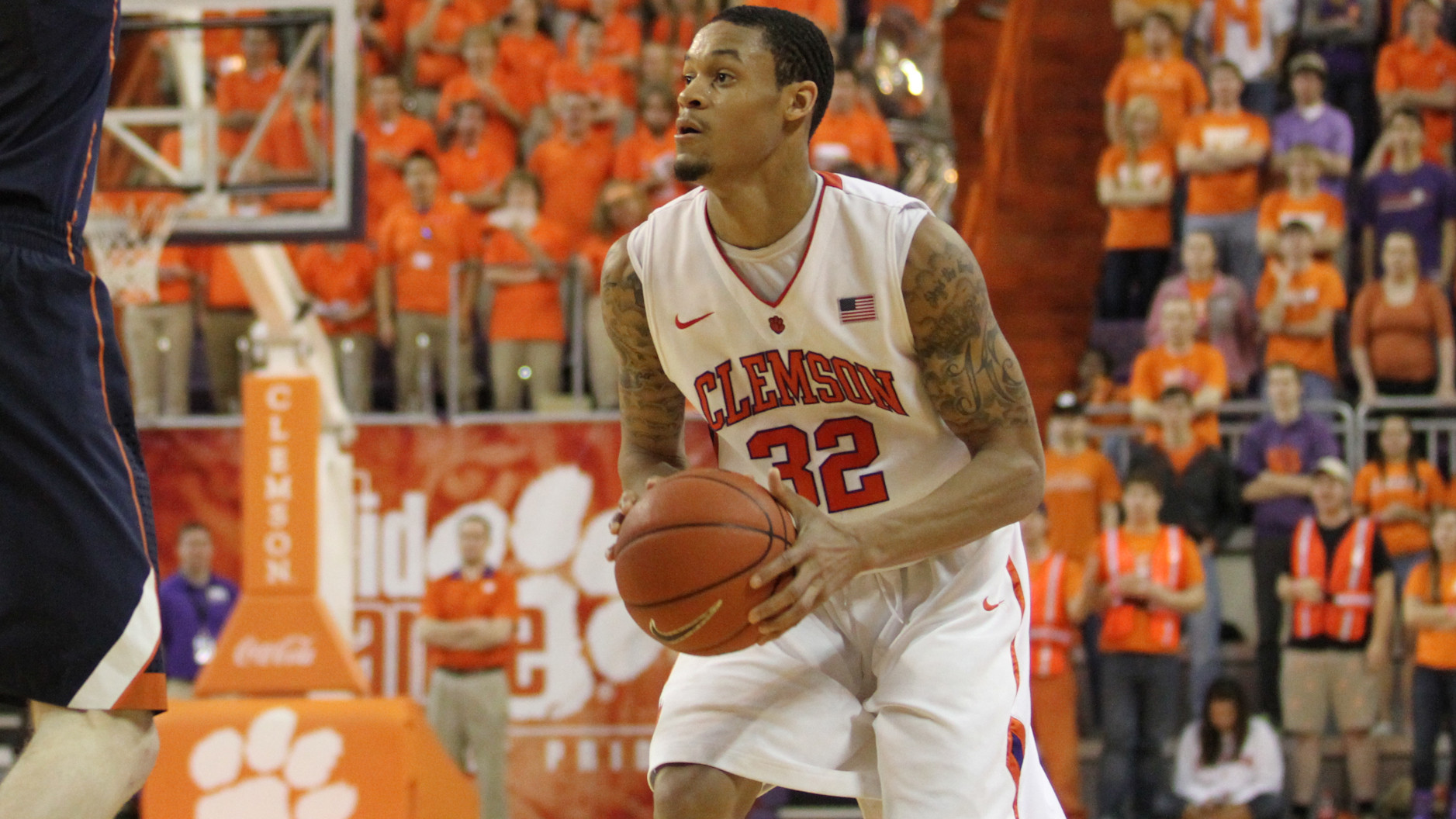 CLEMSON, SC – K.J. McDaniels nailed a pair of free throws with 17.2 seconds left and Clemson forced a missed three-pointer on the other end to preserve a 63-60 victory over Georgia Tech on Tuesday in front of a crowd of 7,059 fans at Littlejohn Coliseum.  The Tigers moved to 12-8 overall and 4-4 in the ACC, while Tech dropped to 11-8 overall and 1-6 in conference play.

McDaniels posted a team-high 15 points on a night where Clemson overcame its largest deficit of the season, 10 points.  The Tigers last overcame a deficit of 10 or more points and won on Mar. 1, 2012 against Virginia Tech on Senior Day.

Clemson shot 45.6 percent Tuesday, making 26 of 57 shots.  The Tigers struggled to just 5-of-16 from three, while leading scorer Devin Booker was held to 3-of-10 shooting as well.  Nonetheless, the Tigers prevailed as they got nine points from Milton Jennings, eight from both Booker and Damarcus Harrison, and a season-high seven off the bench from Bernard Sullivan.

Brian Gregory’s Yellow Jackets shot 42.6 percent, despite a 9-for-11 start Tuesday.  Tech struggled after making its first three from behind the arc, finishing just 4-of-15.  The Yellow Jackets won the rebounding battle, 35-34, but were guilty of 17 turnovers.

Georgia Tech came out on fire, hitting seven of its first nine field goal attempts – three alone by Chris Bolden.  Bernard Sullivan hit his first career three-point basket to pull Clemson within five at 15-10, but Tech responded with five straight of its own to make it a 10-point edge with 12:35 to go.  The lead dwindled to two at 26-24 with 6:04 to go when freshman guards Adonis Filer and Jordan Roper scored six straight points – the last two courtesy a steal and slam by the 5-foot-11 Roper.

Clemson took its first lead at 31-30 on a follow jam by McDaniels.  Moments later, Harrison buried his second three from the right corner to push the advantage to four.  McDaniels then got behind the defense after a steal and converted a lob from Hall that made it 36-30 with 13.8 seconds left before intermission.

Once down by 10, Clemson went up by the same margin after four straight out of the break, the last on a putback inside by McDaniels.  The lead reached 11 at 43-32 when Rod Hall took a feed from Harrison and rose up for his first dunk of the season.  Tech pulled to within seven at 45-38 inside of 14 minutes, but Harrison responded with a runner in the lane on the other end.

The lead was trimmed to three after a 14-6 run, before Sullivan hit a floater in the lane around the eight-minute mark.  Jennings broke an 0-for-9 slump from deep with a three at the top of the key to push Clemson ahead 54-48 after a Brad Brownell timeout with just over seven minutes left.

Up 54-51 with just under five to play, Sullivan followed a Booker miss inside with a thunderous dunk to push the lead to five again.  Filer followed with a runner in transition, making it 58-51 with 3:47 to go.  The lead was just three at 58-55 before a McDaniels freebie at the 1:40 mark.  On the ensuing possession, Bolden turned it over off a double-team to give the Tigers possession inside the final 82 seconds.  Booker got deep position and was fouled with 57 seconds to go and calmly converted a pair at the line to make the cushion 61-55.

Daniel Miller cut the deficit to two at 61-59 on an enormous putback slam off a steal with 27.7 seconds remaining.  Hall was guilty of a foul after Harrison back rimmed a free throw, and Mfon Udofia stepped up to hit one and cut it to 61-60.

Miller led the Jackets with a game-high 16 points, while reserve post man Kammeon Holsey chipped in 14 and Marcus Georges-Hunt added 11.

The Tigers hit the road for four of their next six contests, starting Saturday at Boston College.  The game will tip off from Silvio O. Conte Forum at 12:00 noon on the ACC Network.