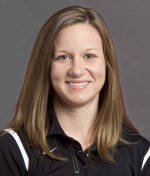 CLEMSON, SC – Kate McCrary has been named Director of Ticket Operations for the Clemson Athletic Department, announced Assistant Athletic Director/Director of IPTAY Annual Fund Travis Furbee on Wednesday. McCrary is returning to Clemson after nearly two years as an Assistant Ticket Manager at the University of Arkansas.

At Arkansas, McCrary assisted in the selling, allocation and distribution of football and men’s basketball season tickets. She also managed, coordinated and reconciled ticket sales for all of the Razorbacks’ ticketed women’s sports. During her tenure at Arkansas, McCrary worked closely with the Razorback Foundation in order to provide effective communication and exceptional service to donors.

From 2006-10, McCrary was an Administrative Specialist in the Clemson Athletic Ticket Office, during which time she managed and coordinated ticket sales for men’s soccer. She also organized staff and tickets for several NCAA Tournament events held at Clemson.

McCrary graduated from Clemson in 2005 with a Bachelor of Science degree in Parks, Recreation and Tourism Management, with a concentration in Sport Management. She served as a student assistant in the Clemson Athletic Ticket Office during her time as a student.