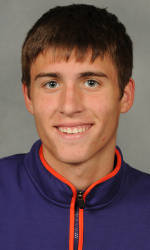 COLUMBIA, SC – Clemson’s cross country program got off to a strong start in its 2010 season with a men’s and women’s team sweep on Friday at the Gamecock Invitational. The men’s team easily won with 19 total points, compared to runner-up Coastal Carolina who had 45. The women’s team was in a much bigger fight, although it was without its top four returning student-athletes from a year ago. Clemson scored 38 points to hold off the Chanticleers, who totaled 41, and host South Carolina, who had 43 on the night.

For the second straight season, a newcomer captured an individual title at the season opener. Last year, Kelsey Armstrong won the women’s 5K in her first-ever varsity collegiate race. This time around, freshman Ty McCormack took home the honor in the men’s 5K. A native of Gainesville, GA, the former USA Junior Olympic champion posted a time of 15:08.13 and won by over 12 seconds over his closest competitor.

He was not alone in terms of freshman performing well in their inaugural race. Nathan Hendershot of Pendleton, IN placed fifth overall with a time of 15:54.14. Hendershot was a two-time all-state cross country runner for Pendleton Heights High School prior to enrolling at Clemson.

On the men’s side, three veterans rounded out the scoring five. Chad Holt staved off Chris Slate in a battle between two seniors. Holt’s time of 16:06.64 was good enough for seventh, while Slate was eighth (16:06.79). Blake Kennedy, a sophomore, came across the line in 10th with a time of 16:20.66.

In the women’s 5K, Clemson took a partial squad to the Fort Jackson course on Friday. It was a move that still paid off, as the Tigers took home the championship. Elyse Borisko, a red-shirt freshman, was the team’s top finisher in the runner-up position. She had a 5K time of 18:06.42. The team’s No. 2 runner on Friday was sophomore Sarah Turman, who turned in a time of 18:12.04 in a fourth-place effort.

The teams return to action in two weeks to play host to the Clemson Invitational. The event will serve as Clemson’s first home event since the 2006 fall season. The race is scheduled to be held on Friday, Sept. 17 at Musser Farms Fruit Research Center, just miles from the university’s campus.