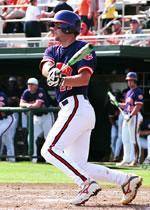 Clemson third baseman Brad McCann (Duluth, GA) was named one of five National Players-of-the-Week by Collegiate Baseball Monday. In just over two games last week, the junior was 8-for-10 with eight runs scored, a double, two homers, eight RBIs, two walks, and a stolen base. He also reached base in 11 of his 13 plate appearances and had an .846 on-base percentage. McCann, who did not win ACC Player-of-the-Week honors despite receiving national honors, was hit by a pitch in the first game at #15 Georgia Tech on May 14. After scoring on Lou Santangelo’s home run, he left the game with a bruised arm and did not play again in the series.

McCann went 6-for-6 with a double, two homers, four runs scored, and six RBIs against a #27 ranked (Collegiate Baseball) College of Charleston club on May 12 at Doug Kingsmore Stadium. The six hits tied a Clemson single-game record, as he became the eighth Tiger in history and first since 1992 to accomplish the feat. One of his two home runs was a grand slam and came on an 0-2 pitch. No Tiger had even totaled five hits in a game in 2004 before the game against the Cougars. Against Furman the night before, he went 2-for-4 with three runs scored, two RBIs, and two walks.

McCann was also recently named one of 30 semifinalists for the 2004 Dick Howser Trophy, given to the top collegiate baseball player. The winner will be announced at the College World Series on June 18. The trophy is given in memory of the former Florida State All-America shortstop and Major League manager who died of brain cancer in 1987. McCann is one of the top-30 players for the Golden Spikes Award as well. He leads the Tigers and the ACC with a .388 batting average, 13 homers, 17 doubles, 54 RBIs, 52 runs scored, and a .462 on-base percentage in 51 games this season.