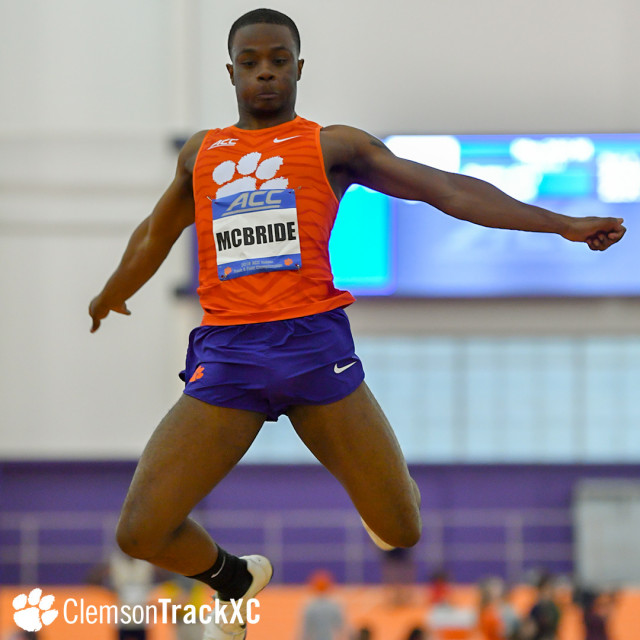 In the 800m prelims Friday, the Tigers swept top-2 finishes on the women’s side in Kamryn McIntosh (2:05.84) and Fellan Ferguson (2:05.93). Both times for McIntosh and Ferguson are personal bests. On the men’s side, John Lewis also qualified for Saturday’s 800m final after winning the prelim with a season-best 1:48.62.

Similarly, Rebekah Smith (7.305) and Torie Robinson (7.306) went 1-2 in the women’s 60m dash preliminary. The ACC’s top duo in the 60m also qualified for Saturday’s finals in the 200m dash after Smith turned in a personal-best 23.53 seconds to place third, while Robinson placed fourth with a time of 23.68 seconds. In the men’s 200m dash, Cordell Lamb achieved his personal best with a time of 20.94 seconds to also qualify for Saturday’s finals.

In the 400m dash, Olivia James notched a season best time of 53.25 seconds to win the preliminary event, while Kendra Clarke placed third after posting a time of 53.73 seconds. On the men’s side, Jeffrey Green won his heat with a time of 46.97 seconds, which was good for third-place in prelims.

Grace Barnett guaranteed her spot in Saturday’s 1 mile finals. The senior won the third heat after crossing the finish line in 4:45.60 to place second overall.

In the 60m hurdles, Markeeta Thomas notched her career best of 8.25 seconds to place fourth in Friday’s prelim. Senior Kirk Lewis won the men’s third heat after finishing the race in 7.81 seconds. Both Thomas and Lewis qualified for Saturday’ finals.

The Tigers return to the Clemson Indoor Track & Field Complex Saturday morning. At 10:30 a.m., Anthony Butler, DJ Ledell and Jeremiah Green will lead off the first men’s event in the triple jump, while Grayce French opens action on the women’s side in the shot put. Thomas and Lewis kick off the first running event of the day in the 60m hurdle finals at noon. The championship meet concludes with the 4x400m relays with the women’s slated for 3:25 p.m.

Saturday’s action is set to stream on ACC Network Extra. Link’s for tomorrow’s broadcast as well as live results can be accessed on clemsontigers.com.