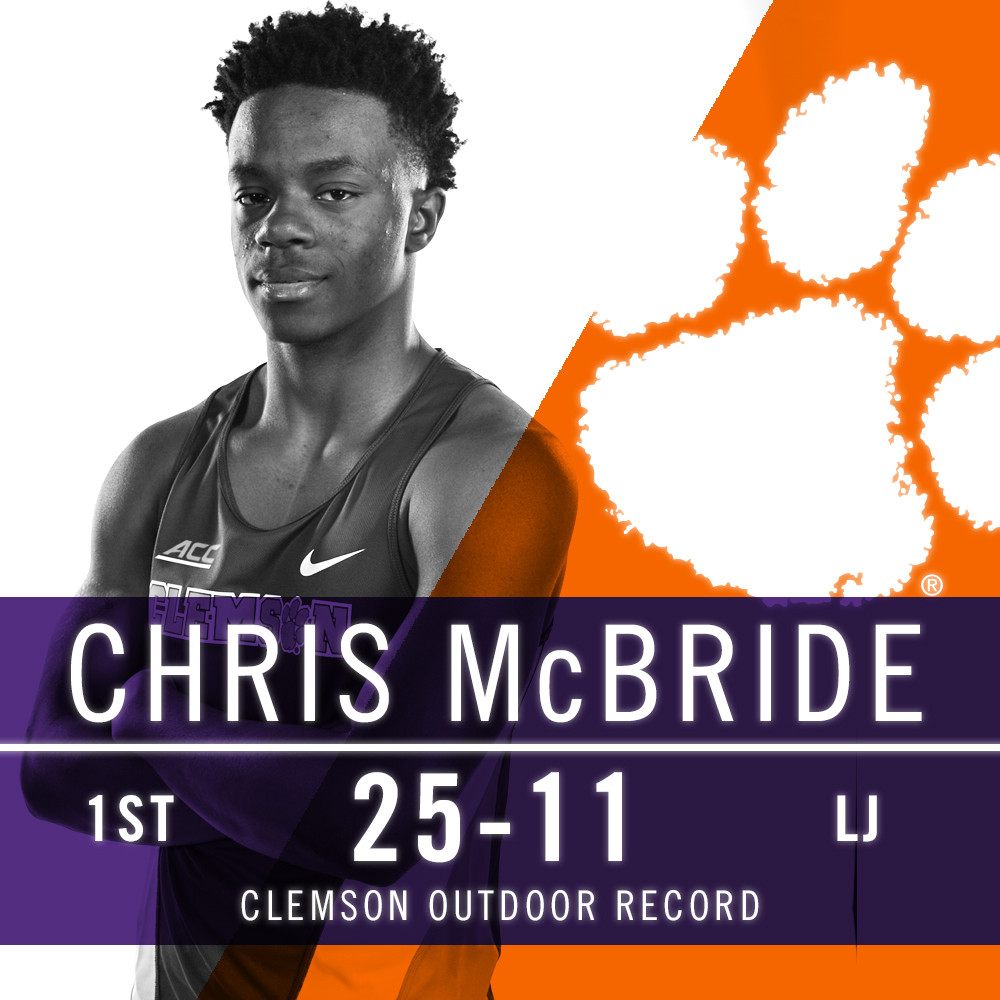 CLEMSON, S.C. — Chris McBride established a school record and won the long jump Saturday at the LSU Alumni Gold meet at Bernie Moore Stadium. In addition, Angelica Collins won the long jump with a big season best and won the B section of the 100 dash to highlight the women’s action from Baton Rouge, La.

McBride has now staked claim to both Clemson’s indoor and outdoor long jump records as a sophomore in 2017, and did so in fine fashion Saturday. McBride unleashed a monster effort of 25-11 into a slight headwind on his third attempt.

Collins had a big day for the Tigers. The junior college transfer won the invitational long jump with a mark of 20-9.75, good enough for fourth in the Clemson record books. She also won the B final of the 100, with a time of 11.51. Collins also ran with the 4×100 relay that claimed the runner-up spot behind LSU.

Iana Amsterdam was a third horizontal jumper to claim victory Saturday. The senior from New Jersey won the women’s triple jump with a top leap of 44-0.5, missing the legal wind mark by 0.1 meters per second.

The men’s 800 proved to be a fruitful event once again, with the Tigers claiming spots two through four in the finishing order. Mpho Makofane led three personal bests, taking silver with a time of 1:47.83. His time ranks No. 4 in Clemson history, just ahead of John Lewis who was third place Saturday in 1:47.95. Terrell Jackson established the program’s freshman record by running 1:48.01 and taking fifth overall.

Ersula Farrow was the top collegian in the women’s 800, posting a time of 2:04.51 that was consistent with her performances from earlier this season. In other running action, Sabria Hadley posted top-six finishes in both short sprints.

The 4×400 relays saw the Clemson women take second place behind the host LSU Tigers with a season-best 3:35.17. The men ran with Makofane in place of Jeffrey Green, who pulled up in the open 400 earlier in the day.

In Friday action in Atlanta, freshman Logan Morris raced to a win in the women’s steeplechase. The All-ACC cross country runner produced a time of 10:49.59, fourth-best in program history.

Clemson returns to action Thursday through Saturday next week at the Penn Relays.