AUSTIN, Texas – Clemson Track & Field’s Chris McBride earned his fourth career All-America distinction Wednesday at the 2019 NCAA Outdoor Track & Field Championships after placing 11th overall in the long jump to earn Second Team honors. The senior registered two season bests on the day, including 7.71m (25-3.5) and 7.73m (25-4.5) on his on his second and third attempts, respectively. McBride was the third-best jumper on the day among flight 1 competitors.

McBride, who is set to complete his undergraduate degree in December and has two full outdoor seasons under his belt, is Clemson’s program record holder in both the indoor and outdoor long jumps. His PR of 7.90m (25-11), which he achieved at the 2017 LSU Alumni Gold (outdoor), is the furthest long jump in Clemson history. Additionally, McBride is currently the only long jumper in program history to win multiple ACC indoor long jump titles – with two.

On the track, the men’s 4x100m relay consisting of Fabian Hewitt, Marcus Parker, Alex Sands & Deonte Tolbert (39.67) registered the Tigers’ best NCAA finish in the event since 2013. Clemson placed sixth in heat 2 and 18th overall in Wednesday’s semifinal round.

Shortly after competing in the 4x100m relay, Parker took to the track again in the 200m semifinal. The transfer from Eastern New Mexico, a Division II program in Portales, New Mexico, placed 17th overall and fifth in heat 1 with a time of 20.59 seconds. In his first year at Clemson, Parker was the Tigers’ top 100m and 200m sprinter, in addition to contributing to both the 4x100m and 4x400m relays. The sophomore’s PR in the 200m – 20.33 – currently stands at No. 6 in Clemson history. 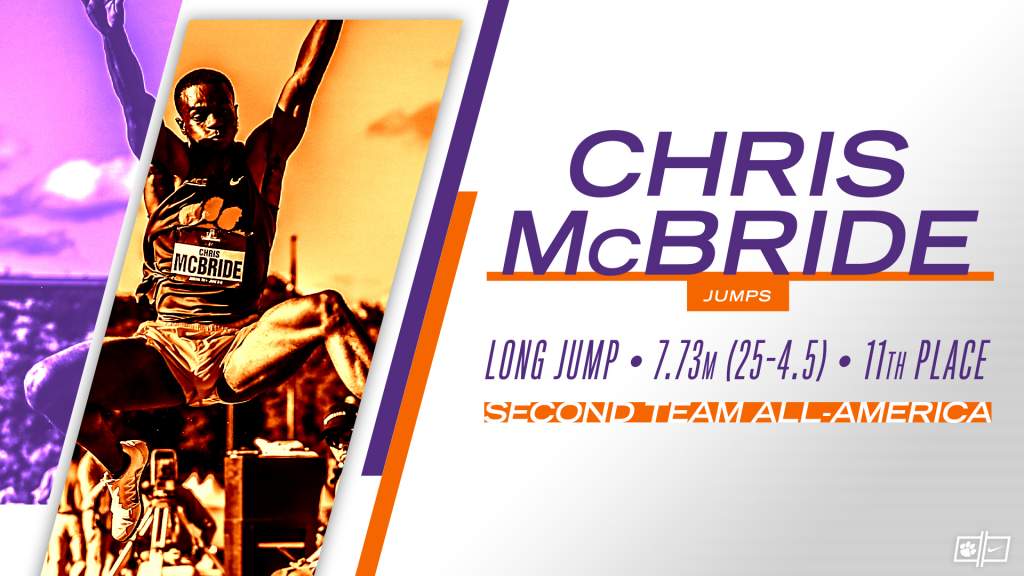