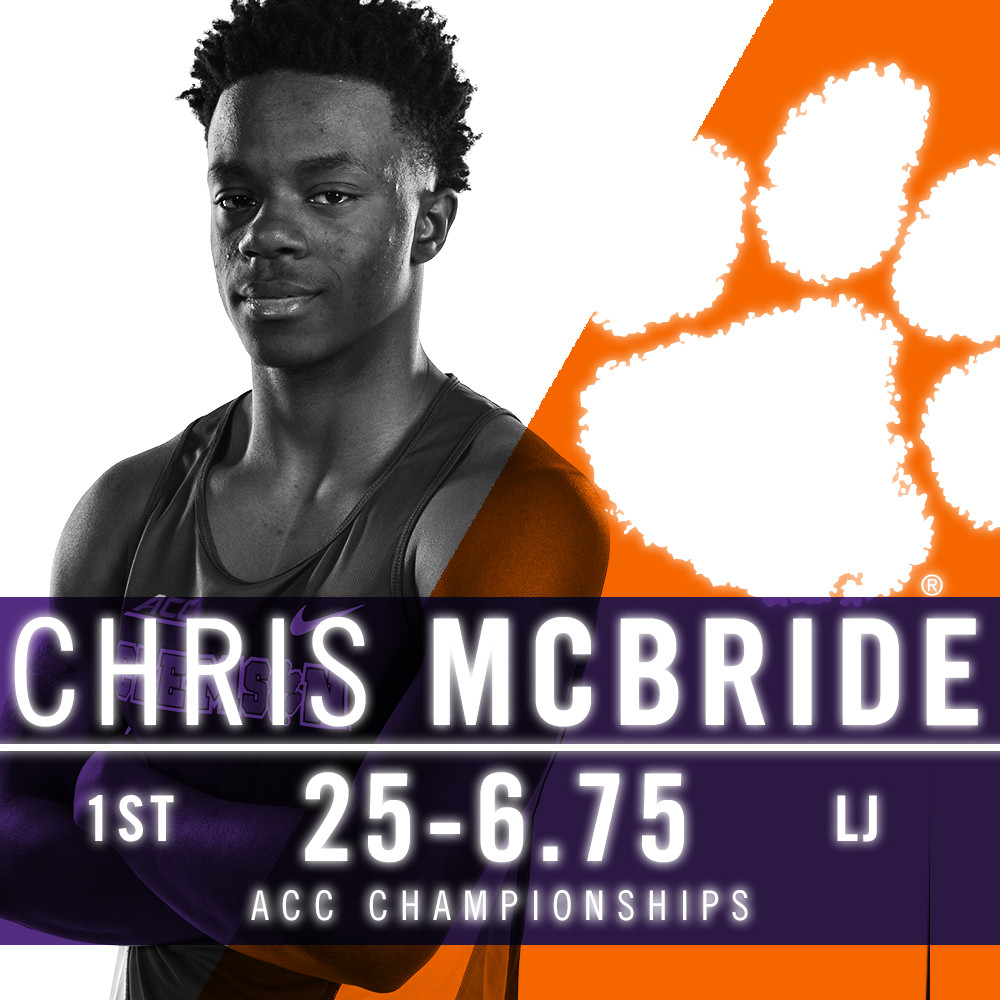 SOUTH BEND, Ind. – Chris McBride and Angelica Collins both scored big for the Tigers in the field as Clemson set itself up for a big finale at the ACC Championships. Combined, the men’s and women’s programs qualified 18 student-athletes for Saturday afternoon’s finals.

McBride delivered his best in the long jump, tying his own Clemson indoor record in the event to claim his first ACC gold medal. The sophomore led the event through the first two jumps but on the last attempt of the preliminaries, William Solomon captured the lead heading into the break. However, McBride immediately responded on his first attempt of the finals and secured the championship with a mark distancing 25-6.75. The leap is the 12th best jump in the nation.

On the women’s side, Collins registered a leap of 20-3.5 in the long jump to win bronze in her first ACC Championship. The jump is just shy of a five second personal best, placing her ninth all-time in Clemson history.

Collins was later just .03 seconds from qualifying in the 60 meter dash, clocking in at 7.42. However, Clemson qualified four Tigers in the event as Rebekah Smith, Ranee Ricketts, Torie Robinson and Sabria Hadley all advanced to the finals. Smith and Ricketts registered the top two times of the preliminaries, finishing at 7.31 and 7.36 respectively.

Hadley and Ricketts later qualified in the 200 meter dash as well with the third and seventh fastest times of the prelims. Hadley finished at 23.60 while Ricketts ran the event in 23.85. In the 400m, Olivia James was Clemson’s lone qualifier as she finished sixth at 53.61.

Clemson nearly had three more qualifiers in the 800m run however, Dana Maydew’s three-second personal best was just shy of advancing her to her first collegiate finals race. Her time of 2:09.62 would have qualified her in last year’s indoor ACC Championship and ranks her 10th all-time in Clemson history. Lakeisha Warner also ran a personal best, taking sixth at 2:07.25 while Ersula Farrow led the Tigers in second place at 2:05.82. Grace Barnett continued her dominance in the mile, registering the fastest mile of the prelims and finishing with a time of 4:44.72.

On the men’s side, Kirk Lewis ran the second fastest time in the 60 meter hurdles to qualify for the finals while John Lewis was Clemson’s lone qualifier in the 800 meter run. Lewis clocked in at 7.88 in the 60m hurdles while Lewis finished third in the 800m at 1:48.94.