Check out some of the best moments from Friday's action

BLACKSBURG, Va. – In his first championship meet since having season-ending knee surgery last year, Clemson senior Chris McBride took home the gold medal in the men’s long jump Friday at the 2019 ACC Indoor Track & Field Championships. McBride flew for 7.82m (25-8) on his first leap of the day out of flight No. 2 to rewrite his own program record of 7.79m (25-6.75), which he set in 2017. With the win, McBride takes home Clemson’s fifth-ever indoor long jump title on the men’s side. McBride accounted for 10 of Clemson’s 15 points on the day.

“For being out for a year with a major knee surgery, for a jumper to come back and jump 7.82m, it just shows the hard work and how persistent he is,” said Clemson Track & Field head coach Mark Elliott. “He just makes us all look really good, so I’m really happy for him.”

In addition to McBride, the Tigers had a stellar day on the track. In an afternoon that was jam packed with preliminary events on the track, with the exception of Friday’s 5,000m finals, Clemson saw a combined 10 runners qualify for Saturday’s finals. Most notably, Rebekah Smith qualified for both the women’s 60m and 200m dashes, which means Clemson has the opportunity to score in a combined 11 events on the track Saturday.

The men secured their first points of the day by tallying five in the men’s high jump as sophomore and newcomer Anthony Hamilton achieved his personal best, clearing a height of 2.13m (5-11.75) on his second attempt at that height. His fourth-place finish earns him Second Team All-ACC honors, which makes him Clemson’s first all-conference recipient in the high jump since Torian Ware in 2014 on the men’s side.

🙌 HUGE props to our guy Anthony Hamilton, who PR'd in the men's high jump to put up our first five points on the men's side!https://t.co/LnGWCRagyP#ClemsonTrackXC🐅🐾 #ChampionshipSZN pic.twitter.com/U3NPVDnJVM

In the cage, sophomore Danielle Little PR’d by more than a full meter to move from to No. 6 to No. 4 all-time in Clemson history. Little threw for 19.10m (62-8) on her third toss of the day in flight No. 1. Little was in second place entering Friday’s finals, but ended up finishing in ninth behind a flurry of nationally-ranked ACC throwers. 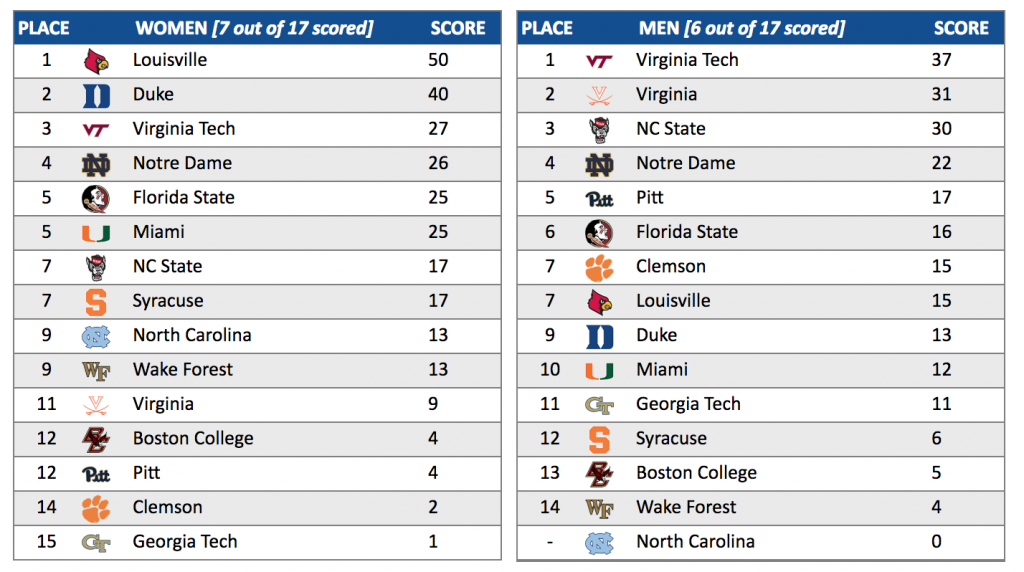 👏 One prelim in, and we have our first qualifier, Logan Morris!

LaFranz Campbell (7.83) continues to make his case to prove he's the best hurdler in the ACC. Campbell won heat No. 3 of the men's 60mH to automatically qualify for Saturday's final, which is also good for second overall.#ClemsonTrackXC🐅🐾 #ChampionshipSZN pic.twitter.com/Uj6Nndo8wJ