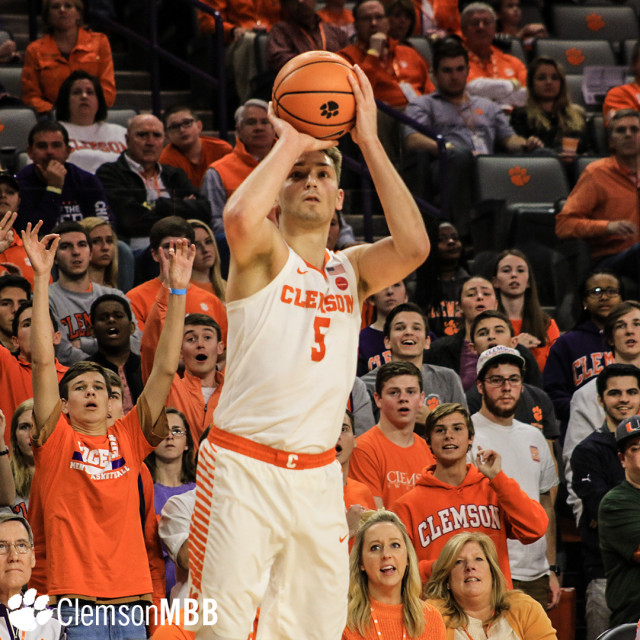 CLEMSON, S.C. — For just the fifth time in history, Clemson University men’s basketball knocked off a Top 25 opponent with just one day to prepare when they took out No. 18 Miami on Saturday afternoon, 72-63, in front of a sold-out crowd in Littlejohn Coliseum.

Battling back and forth with the Hurricanes (13-3, 2-2 ACC) in the first half took a turn in the Tigers’ favor when they faced a seven-point deficit at 22-15. A 3-pointer by Gabe DeVoe would spark a 9-0 run which was capped by a tip-in rebound by Grantham to go up 24-22.

Despite one more lead change in the opening stanza, the Tigers took a 34-30 lead into halftime.

The Tigers pushed its halftime lead to 40-32 early in the second half, but the Hurricanes battled back to knot the score midway through at 44-44.

Miami would cut the deficit to two points on two occasions, but with a 60-57 lead and 2:02 left in regulation, the Tigers would put together a back-breaking 10-0 run to put away the Hurricanes for good.

The Tigers finished with 13 assists on 22 made baskets and recorded seven blocks to ensure a stout defensive effort.

Miami came into the contest leading the ACC in 3-point percentage defense in conference play (10-for-50; 20 percent). The Tigers shot 12-for-21 from distance for a scorching 57.1 percent from long range.

Clemson returns to the floor on Tuesday, Jan. 16 when it travels to Chapel Hill, N.C. to take on the Tar Heels. Tipoff is set for 7 p.m. from the Dean E. Smith Center.

Notes: Clemson improves to 15-2 overall and 4-1 in ACC play … the win marks just the fifth time in Clemson history that the Tigers knocked off a Top 25 ACC opponent with just one day to prepare … Shelton Mitchell (the Tigers active assists leader) led the team with a season-high seven dimes (170 in his career at Clemson; 280 in his career) … Donte Grantham led all scorers with 18 points on 7-for-11 shooting and a perfect 4-for-4 from three … Grantham’s second made three of the afternoon moved him into sole possession of ninth all-time at Clemson in threes made … Miami came into the game leading the ACC in conference play in 3-point percentage defense (20 percent), the Tigers shot 57.1 percent from three … Mark Donnal turned in back-to-back double figure scoring games after posting 13 points at NC State and scoring 12 against the Hurricanes … the last time Donnal achieved that was Feb. 16 and Feb. 21 of 2016 while at Michigan … with the win head coach Brad Brownell moves into sole possession of third all-time in wins at Clemson with 139 – passing Oliver Purnell.