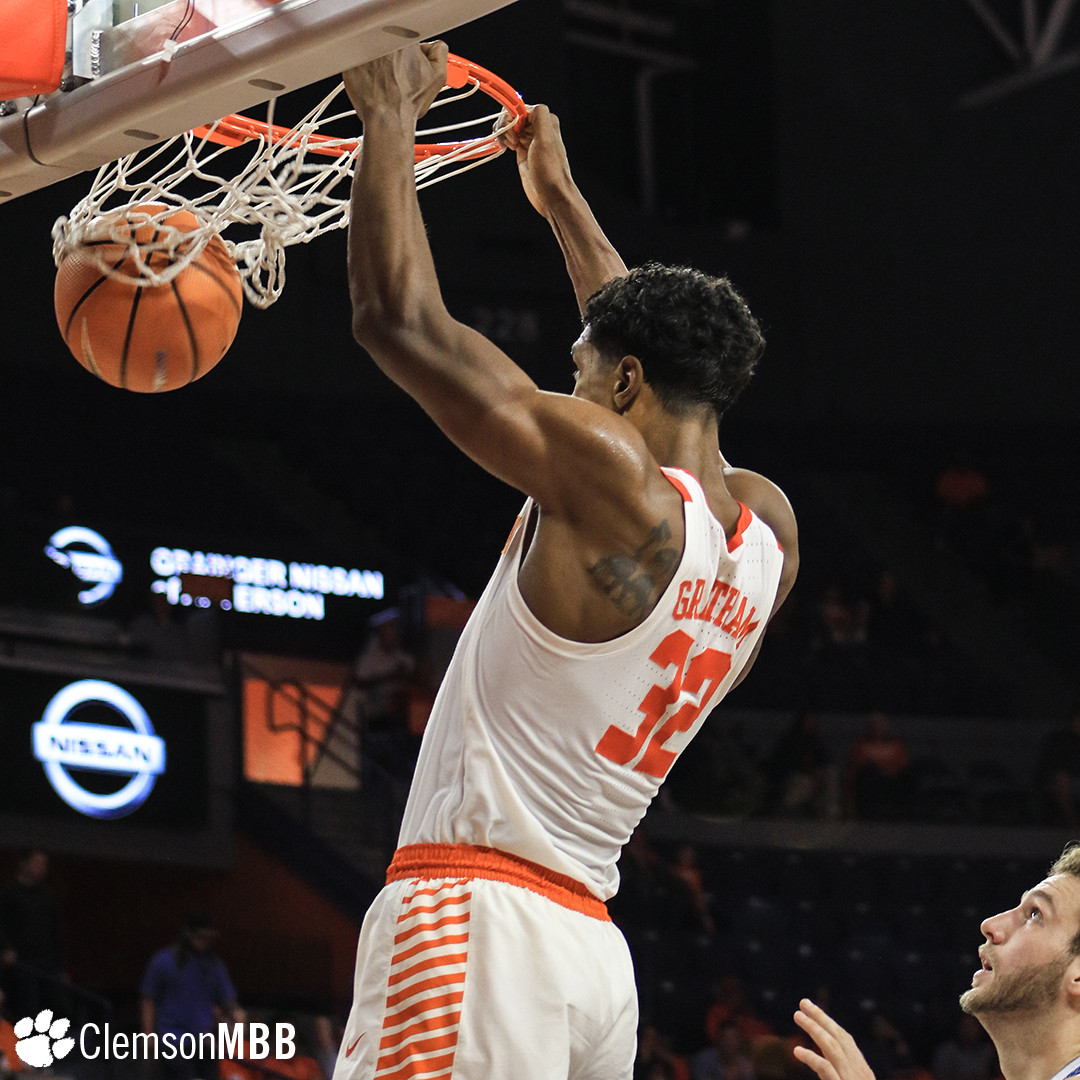 CLEMSON, S.C. — Clemson University men’s basketball won for the seventh time this season – matching its best start to a campaign since 2013-14 – and used a season-best scoring margin in a 31-point victory over UNC Asheville on Sunday afternoon inside Littlejohn Coliseum.

For the second consecutive game Marcquise Reed led the Tigers (7-1) in scoring with a game-high 19 points, including four rebounds, four steals and three assists. Donte Grantham notched his third career double-double and second of the season with 17 points and 10 rebounds. Grantham also posted two blocks and a steal in the performance.

10 different Tigers got in the scoring column on Sunday, while the Tigers as a team shot 52.2 percent from the field – limiting the Bulldogs (5-3) to just 34.4 percent shooting, including a dismal 26.3 percent from three.

The Bulldogs got off to a quick start up 6-0 to force an early Tiger timeout, but Clemson quickly recovered on an 11-2 run for a lead that they would never relinquish.

After taking a 10-point lead into halftime, the Tigers once again won the second-half by 21 points for the second consecutive contest – scoring 47 points and allowing the Bulldogs to score just 26.

A 20-8 run over the middle part of the second half propelled the Tigers to a 23-point lead, which they would eventually turn into a 31-point win.

“We imposed our will on them defensively,” said head coach Brad Brownell. “I’m extremely pleased with the way we played. Very good win and performance for us.”

Clemson turned UNC Asheville over 16 times in the game and turned those into 19 points – outscoring the Bulldogs 19-7 in points off turnovers. The Tigers also held a significant advantage in points in the paint 48-28.

Both Gabe DeVoe and Elijah Thomas finished with nine points each. DeVoe also posted six rebounds and four assists to go along with zero turnovers.

The Tigers will return to the court on Saturday, Dec. 9 when it hosts Samford at 3 p.m. inside Littlejohn Coliseum.

Notes: With the win matches its best start to a season since 2013-14 (7-1) – prior to 13-14, the last time Clemson started a season 7-1 or better was 2008-09 … the Tigers improved to 8-0 all-time against UNC Asheville … the Tigers used 10 dunks en route to its victory – the most in a game by Clemson since a 102-67 win over Western Carolina on Feb. 11, 1998 … Donte Grantham notched his second double-double of the season and the third of his career … Marcquise Reed led Clemson in scoring for the seventh time this season – tying for the most this year with Grantham … Reed also posted four steals for the first time since Dec. 31, 2016 and for just the fifth time in his career … Shelton Mitchell led Clemson in assists for the seventh time this season … Clyde Trapp notched a career-high seven points (perfect from the field – 3-for-3) … Malik William matched a season-and-career-best with six points … Clemson finished with over 50.0 percent shooting from the field for the fifth time this season … head coach Brad Brownell is now just two wins shy of his 300th career victory (298).