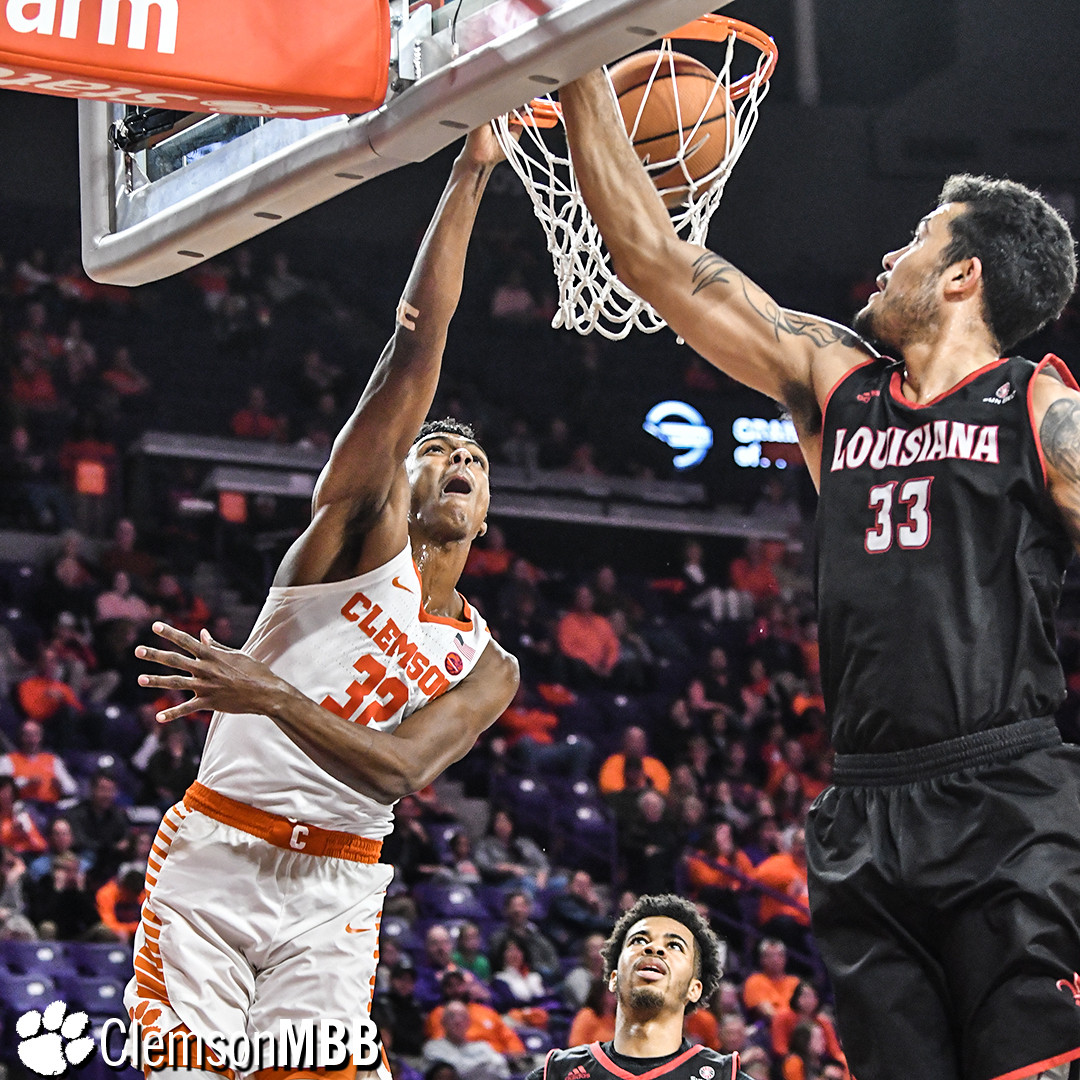 The 89 points were the most by the Tigers (11-1) this season. Clemson also made a season-high 11 3-pointers which were scored by eight different players, tying the program record. The Tigers also had eight players hit threes against Virginia on Jan. 22, 1983 and against Presbyterian on Nov. 13, 2009.

With Grantham’s 17 points and 10 rebounds, the senior also surpassed 1,000 career points to become the 39th player in Clemson history to achieve that feat.

Shelton Mitchell and Elijah Thomas both posted 15 points, while Mitchell dished out a game-high six assists and Thomas grabbed five boards. David Skara netted double-figures in just his third game as a Tiger with 11 points.

The Tigers started to pull away from the Ragin’ Cajuns (10-3) late in the opening stanza. Clemson built a 15-point advantage and finished with that same lead following back-to-back threes from Grantham and Skara to close the half.

Clemson flexed its defensive muscle, as it has all season long, limiting the Cajuns to 25.8 percent shooting in the second half and outscoring them 46-32 for the 29-point victory.

The Tigers will return to the court on Dec. 30 in Littlejohn Coliseum to open up Atlantic Coast Conference play with NC State. Tipoff is slated for 4 p.m.

Notes: Clemson improves to 11-1 on the season (best start since 2008-09) … the win is the first-ever over Louisiana-Lafayette in the first meeting between both programs … the 60 points allowed was the lowest point total all season long for the Cajuns … the Tigers held the Cajuns to just 28.1 percent from the floor – its lowest shooting percentage of the season … they held ULL to nearly 29 points below its season average coming in to the game (88.6) … Clemson made a season-high 11 3-pointers … eight different players made a three for just the third time in program history (tying Jan. 22, 1983 vs. Virginia; Nov. 13, 2009 vs. Presbyterian) … Donte Grantham notched 1,000 career points and his fourth career double-double (third of the season) … David Skara netted a season-high 11 points … Clyde Trapp scored a season-high eight points … the Tigers finished the game with over 50.0 percent shooting for the seventh time this season and are 6-0 in those games … the win gives head coach Brad Brownell his 135th victory at Clemson – moving him four wins shy of the third-most victories all-time at Clemson … the win moves Clemson to 70-29 (.707) all-time in November/December under Brownell.