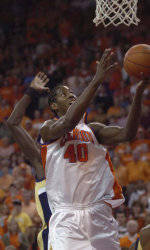 Mays had 16 points, including the game-winning layup with 2.2 seconds to go, as the 23rd-ranked Tigers became the Division I’s only unbeaten team with a 75-74 victory over Georgia Tech on Saturday.

The best start in 20 years for Clemson (16-0, 2-0 Atlantic Coast Conference) was in serious trouble when Javaris Crittenton scored with 6.5 seconds left to put the Yellow Jackets up 74-73.

That’s when Mays caught the inbounds pass at midcourt and dribbled down the left side of the lane before putting up his soft banker off the glass.

At practice on Friday, the Tigers practiced such a last-second play. Mays has two choices to look for open teammates, Clemson coach Oliver Purnell said. But on Saturday, Mays saw an opening and went for it.

“I wasn’t the first option,” Mays said. “But I was the option tonight.”

Top-ranked UCLA lost 68-66 to No. 16 Oregon earlier Saturday to leave Clemson as the lone unbeaten.

Mays ran his own personal streak at Clemson to 27-0 the last two years. The Tigers opened 11-0 a year ago when Mays, then the Tigers’ top rebounder, was declared academically ineligible and did not play again.

“It feels pretty good,” Mays said. “This is something special.”

K.C. Rivers added 20 points and Cliff Hammonds had 17 for the Tigers, who can match the school record for the best start set by the 1986-87 team when they go to North Carolina State on Tuesday night.

Mouhammad Faye put up a desperation heave that missed for Georgia Tech (11-4, 0-2), which has lost its last 14 games on its opponents court.

Georgia Tech coach Paul Hewitt told his players in the timeout just before the final play that he did not want to give a layup chance to Mays.

“We didn’t do what we were supposed to do,” Hewitt said. “I haven’t seen the tape, but I’m sure there was somebody there to stop him.”

Hammonds said Mays made a nice move to sidestep a Tech defender and get to the basket.

“He sidestepped them and laid it up,” Hammonds said. “It was a great move.”

Clemson students and fans rushed the court, swarming Mays and his teammates in celebration. They cheered even louder when the UCLA score was announced. It was hard to imagine they had any energy left to shout after the wild final minute they witnessed. The lead changed hands four times with the nearly full crowd gasping at every turn.

Purnell wants his players to work as hard as they have thus far. But he also wants them to enjoy their time in the spotlight.

“I told them to embrace it,” he said. “It doesn’t come that often.”

And now the rest of the country will have to pay attention, Mays said. He and his teammates have heard their pre-ACC schedule picked apart by critics who are waiting for the Tigers to fall flat in league play.

“We’re in conference play now so there’s not much more they can say,” Mays said.

That’s when Clemson put together an 11-2 run to move in front. Mays tied the game with two foul shots and added a slam off a missed shot during the streak.

The Tigers, though, could not hold off Georgia Tech.

Jemeris Smith hit two foul shots to put the Yellow Jackets up 72-71 with 33 seconds left. After Hammonds’ driving shot regained the lead for the Clemson, Crittenton looked like he had saved the day for Georgia Tech with his floating basket.

The Tigers called a timeout to set up the final shot with Mays moving smoothly to the basket for the game-winner.

It’s the second straight game Clemson needed a late shot to win. Hammonds’ layup with 3 seconds left at Florida State gave the Tigers a 68-66 victory this past Wednesday night in their ACC opener.

Yellow Jackets freshman Zach Peacock was ejected with 13:12 to go in the game when he hit Clemson’s Trevor Booker with an elbow.