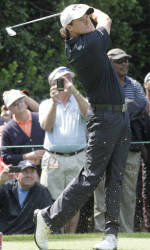 May, Gealy and Saunders Qualify for US Open

CLEMSON, SC – Former Clemson golfers David May, Sam Saunders and Elliot Gealy all qualified for the US Open on Monday, giving the Clemson program five former players in the 2011 event that will be held June 16-19 at Congressional Country Club in Bethesda, MD.

This will be the most former Tigers to play in one US Open. The previous best was four former Tigers in the 2009 US Open, an event won by former Tigers Lucas Glover. It marks the fourth straight year Clemson has had at least three current or former players in the US Open.

Saunders qualified at the 36-hole event in Vero Beach, FL. He had a 141 total for the 36 holes, then advanced through a three players for two spots playoff.

May was a four-year starter for the Tigers and was the ACC Co-Champion at The Old North State Club in 2009. Saunders played three years for the Tigers and was a starter on Clemson’s 2008 team that finished fifth in the nation. Gealy played on four consecutive top 10 Clemson teams, including three with Lucas Glover.

Saunders, the grandson of Arnold Palmer, will make his first appearance in any major.