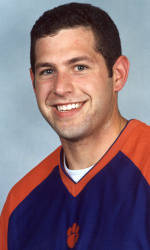 Matt Lombardi will join the Vickery Hall staff as an athletic academic advisor beginning January 2, 2012. He will serve as an advisor for the men’s soccer, men’s tennis and women’s track and field teams at Clemson.

Lombardi comes to Clemson from Georgia Southern, where he worked as an athletic academic advisor with the Eagles’ baseball, football, golf, men’s soccer, men’s and women’s track and field and volleyball teams, for the past three years. Prior to working as an advisor, Lombardi earned a master’s degree in Kinesiology/Coaching from Georgia Southern while working as a graduate assistant with the school’s strength and conditioning staff. In May of 2011, he earned another master’s degree in Counseling Education/Student Services in Higher Education.

Lombardi hails originally from Massachusetts, but was a member of the Clemson track and field team as a thrower under the direction of the late Jarrett Foster from 2001-04. He was a member of four ACC Championship teams while competing for the Tigers, and was a two-time regional qualifier, earning All-ACC recognition in 2004. Lombardi was a team captain in 2003-04 and earned his undergraduate degree from Clemson in 2003.