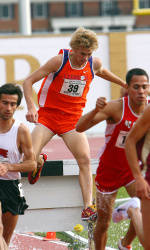 Clemson freshman Matt Hughes competed for his native country Canada at this week’s IAAF World Junior Track & Field Championships in Poland. Hughes, who joined Clemson’s program as a mid-year enrollee, did not qualify for the finals of the steeplechase but finished 14th out of 21 runners.

Hughes posted a time of 9:01.82 on Wednesday, but only 12 runners advanced to this weekend’s final. Hughes was a scorer in the event at the ACC Championships as well as NCAA East Region qualifier in his first year with the men’s track & field program.