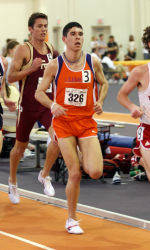 College Park, MD – Matt Clark of the men’s track & field team won the 10,000m run on Thursday to give Clemson a great start to the 2007 ACC Outdoor Championships. The meet is being held at the Kehoe Track Complex on the University of Maryland campus. Clark’s title was his first ACC crown in a Clemson uniform, and it marked the first in that specific event for the Tigers since 1990.

Ironically, Clemson’s last 10,000m winner was Larry Clark (no relation). On Thursday, Clark ran the final quarter mile in 59 seconds en route to a three-second win over a strong field. Clark’s time was a personal best 29:46.26, which was also a facility record. He now has three All-ACC honors in 2007, as he earned accolades indoors in the 3000m and 5000m.

“Matt did an outstanding job today,” said Bob Pollock, head coach of the Tigers. “He ran real strong in cold, overcast conditions against a strong field. Hopefully we’ll have warmer weather tomorrow. But we’re off to a good start.”

The Tigers are in sixth after three scored events. Clemson did not have anyone entered in the javelin or hammer throw, which both took place on Thursday. North Carolina leads the meet with 32 points.

Ryan Koontz stands first in the decathlon after day one, with five events complete. He recorded a point total of 3,739 on Thursday to lead three Tiger multi-event athletes. Joey O’Rourke (3,202) are ninth and 10th, respectively.

Koontz rebounded from a sub-par effort in the long jump with an outstanding performance in the shot put. He recorded a toss of 43’6.5″, best among the 13 decathletes. Feathers and O’Rourke also performed well in the shot put, finishing third and fifth, respectively. Feathers’ mark was 41’5.25″, while O’Rourke had a personal best throw of 39’5″.

The second day of action gets underway Friday with the continuation of the decathlon at 10:00 AM. Adam Linkenauger will lead a group of Tigers in the high jump at 11:00 AM. The running event prelims get started with the 1500m at 3:15 PM.