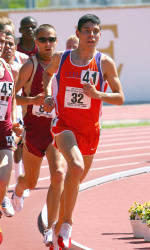 Matt Clark Qualifies for Regionals in 1500m at Georgia Tech

C.J. Spiller qualified for Saturday’s final in the 100m dash after running 10.39 in the prelims. Already a regional qualifier in the event, Spiller had the second-best time Friday despite running into a slight headwind. Trenton Guy ran 10.63, one hundredth of a second shy of qualifying for the final.

Clark, who looks to be a potential at-large bid for the 10,000m at the NCAA Championships, ran 3:47.73 and finished third in the second section of the 1500m run Friday evening. His time was 10th-best overall.

Matt Hughes won the 3000m steeplechase late Friday and improved on his regional-qualifying time. A freshman out of Canada, Hughes crossed the finish line in 8:59.83 in hopes of improving his seed time for the East Region Championships in two weeks.

Joey O’Rourke competed in the pole vault, finishing sixth with a clearance of 15’1″.

George Kitchens. A junior out of Columbia, SC, Fields had a jump of 24’2.25″ on his final attempt Friday. He has qualified for regionals. Kitchens had a tremendous jump of 25’8.25″ on his third preliminary attempt.

Alex Padgett finished fifth in the hammer throw Friday afternoon, but did not reach the regional qualifying standard in the event. He finished with a throw of 183’9″, while teammate Zach Berg was sixth place with a top mark of 179’0″. Scott Pauga, hoping to improve to a regional-qualifying distance in the javelin, finished sixth Friday with a top throw of 186’2″.

The Tigers are back in action Saturday in several events, beginning with the triple jump at 2:00 PM.