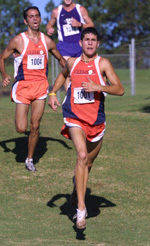 Clemson’s Matt Clark was named the ACC Men’s Cross Country Performer of the Week, announced the conference office on Monday. The sophomore from Hyannis, MA, received the conference accolade for the first time in his career, and is the second Tiger to earn the honor this season. Clark recorded a career-best time of 24:36 in claiming the Winthrop Invitational individual crown, and helped lead the Tigers to a second-place team finish.

The Clemson men’s cross country team returns to action on Saturday, Oct. 16 as the Tigers travel to Terre Haute, IN, to compete in the Pre-NCAA Championships meet.