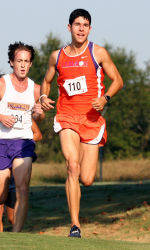 Palo Alto, CA – Senior distance runner Matt Clark finished runner-up late Saturday night at the Stanford Invitational in the 10,000m run. In doing so, the native of Hyannis, MA recorded a time of 28:49.77, which breaks the school record held by Yehezkel Halifa since the 1988 season.

Clark’s time is just shy of an automatic invitation to the NCAA Championships in June, however it is a strong provisional effort for the team’s most talented distance performer. Clark is the defending ACC champion in the 10,000m.

Tyson David of Alabama held on for the race win. He crossed the finish line with a time of 28:47.54. Among others Clark defeated in Saturday night’s competitive section was former Clemson student-athlete Itay Magidi, who had a time of 29:14.26.