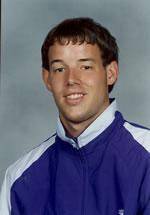 CLEMSON, SC – Mark Henly will represent the Clemson men’s swimming and diving team at the 2004 NCAA Men’s Swimming & Diving Championships this weekend at the Goodwill Games Aquatic Center in East Meadow, NY. Henly will compete in the 100 back on Friday and the 200 back on Saturday, with the preliminary rounds beginning at 12:00 p.m. and the finals commencing at 7:00 p.m. each day.

In addition to winning the ACC Championship in the 200 back in 2004, Henly took third place in both the 100 back and the 200 IM at the meet. He won the 200 back seven times in dual-meet competition during the season and was a member of the Tigers’ 400 medley relay team that posted seven first-place finishes in dual competition. Henly was a two-time ACC Performer of the Week this season and earned National Swimmer of the Week honors for the week of Jan. 17, 2004 after winning the 100 and 200 back and the 200 IM, and being a member of Clemson’s first-place 400 medley relay team in the Tigers 150-150 tie with North Carolina.