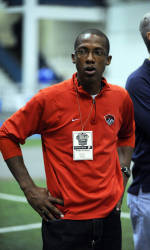 Clemson, SC – Mario Wilson has been added to Clemson’s track & field coaching staff. Director of Track & Field Lawrence Johnson made the announcement Monday. Wilson, most recently an assistant coach at the University of New Mexico, will be in charge of the men’s and women’s vertical jumpers and javelin throwers. He will also assist with the horizontal jumps and multi-events.

“Mario is a young, dynamic coach who is very intelligent,” Johnson said. “We look forward to bringing him and his knowledge to Clemson. He will help build on our field events program as we progress toward the 2009-10 season. We’re very excited he’s chosen to join us at Clemson.”

Wilson joins the Tiger coaching staff after a two-year stint with the New Mexico Lobos. During his short amount of time with the program, he had a tremendous impact in individual student-athlete development. He coached four All-Americans, three Midwest Regional champions, and six Mountain West Conference champions while with New Mexico.

One of the student-athletes he coached, Katie Coronado, earned multiple distinctions as a result of Wilson’s training. She established a school record in the javelin throw, won a pair of Midwest Regional crowns and Mountain West Conference titles, as well as two All-America honors. She was national runner-up in 2008 and 11th in the event in 2009. Coronado was the first female All-American in consecutive years in New Mexico history.

Wilson also guided Anthony Fairbanks to All-America status in 2009 after a ninth-place finish in the men’s javelin. Fairbanks also won a Midwest Regional championship and set a Mountain West record with a throw of 225’9″. Wilson also coached MWC pole vault champion Whitney Johnson, who went on to earn All-Region status as well.

The 2008 season was an impressive one for Wilson’s student-athletes. He coached four NCAA qualifiers, two All-Americans, four Mountain West champions, and 10 All-MWC performers. The aforementioned Coronado not only was named MWC Most Outstanding Performer at the league outdoor meet, but she also went on to place sixth at the 2008 U.S. Olympic Trials in Oregon. In addition to Coronado’s runner-up finish at the 2008 NCAA Outdoor Championships, Wilson also mentored Robert Caldwell to a sixth-place showing in the pole vault. Caldwell was also MWC Most Outstanding Performer under Wilson’s leadership.

Displaying his versatility, Wilson coached Tiyana Peters to an All-Midwest Region performance in the high jump and subsequent appearance at the NCAA Championships. He also coached Sandy Fortner, New Mexico’s all-time record-holder in both the pentathlon and heptathlon. Fortner was the first multi-event athlete to compete at the NCAA Championships for the Lobos. She was 12th in the pentathlon in 2008.

Prior to his time in Albuquerque, Wilson was an assistant coach with Bucknell University from 2002-07. He coached an NCAA finalist in the women’s pole vault, 11 NCAA East Regional qualifiers, and 25 individual Patriot League champions.

Wilson, who began his career as head coach at Holy Cross High School in Flushing, N.Y. in 1998, earned a bachelor’s degree in psychology from Marist College the same year. He was a four-time all-conference defensive back for the Red Foxes in football. Wilson earned a master’s degree in education from Saint Francis in 2003.