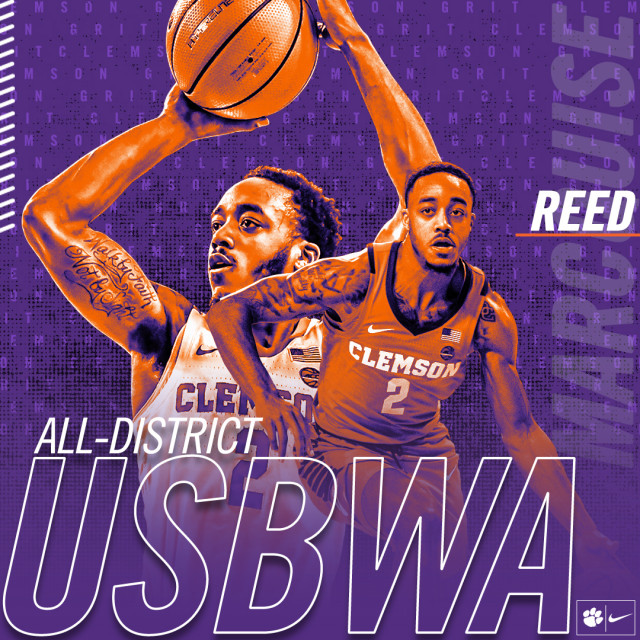 ST. LOUIS — Clemson University men’s basketball redshirt-junior guard Marcquise Reed was named to the U.S. Basketball Writers Association All-District III team, based on voting from its national membership of 900-plus, announced by the USBWA on Tuesday.

The USBWA has selected All-District Teams since the 1956-57 season, its founding year, and Reed will be the first Clemson Tiger to earn the recognition.

Reed was selected as standout player in his region – District III includes Virginia, North Carolina, South Carolina and Maryland. He was one of 10 players selected to the all-district team.

Reed was recently named to the All-ACC second-team for his performance on the court this season. Reed’s second-team honors was the highest since Jaron Blossomgame was named first-team in 2016.

Reed leads the team in scoring this season with 16.4 points per game and also averages 4.7 rebounds and 3.5 assists per contest. He has previously been named ACC Player of the Week.

Reed has posted 11 20-point outings this season, including a career-high 28 points at Virginia Tech, while also grabbing 10 rebounds in that game. In that game, he tied a program record for making eight 3-pointers in a single game.

He is currently the program leader in free throw percentage (87.8 percent). He also achieved the program’s 26th “Triple Leadership” all-time. He led the Tigers in points (20), rebounds (8) and assists (5) in Clemson’s win over North Carolina.

Reed is just nine points shy netting his second career 500-point campaign and remains 25 points shy of tying for the 20th-highest scorer in a single season in Clemson history.