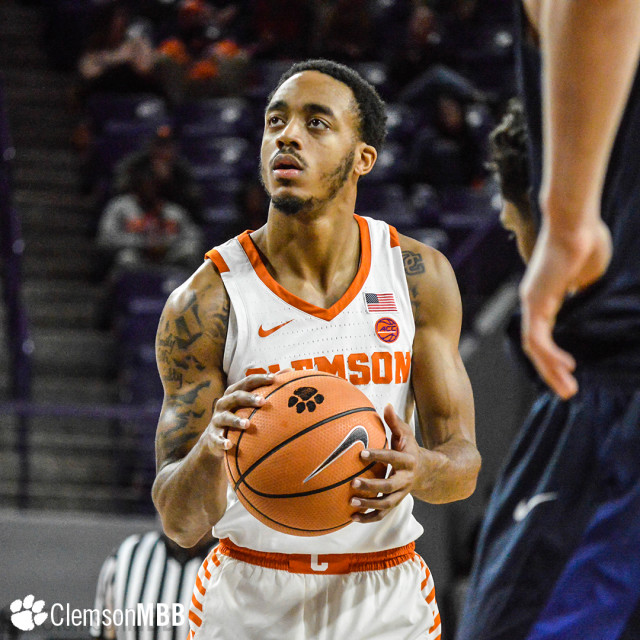 KANSAS CITY — Clemson University men’s basketball redshirt-junior guard Marcquise Reed was named to the 2017-18 National Association of Basketball Coaches (NABC) All-District II second team, announced today by the NABC. Reed was selected and voted on by member coaches of the NABC in NCAA Division I.

Reed is the third player under head coach Brad Brownell to earn the NABC All-District distinction – joining K.J. McDaniels (2014) and Jaron Blossomgame(2016). He is the 32nd player in Clemson history to receive the honor.

Reed was selected previously as an All-ACC second-team performer and earned U.S. Basketball Writers Association (USBWA) All-District III honors for his performances on the court this season.

Reed recently became the first Clemson Tiger to have at least 500 points, 100 rebounds, 100 assists and 50 steals in a single season since 1979-80 when Billy Williams also accomplished that feat. Williams posted 562 points, 104 rebounds, 129 assists and 58 steals. Coincidentally, that year Williams accomplished that mark, the Tigers reached the Elite Eight of the NCAA Tournament.

At the ACC level this season, Reed was one of just three players to accomplish that state line and was joined by Boston College’s Ky Bowman and Duke’s Grayson Allen.

Reed leads the team in scoring this season with 15.9 points per game and also averages 4.6 rebounds and 3.5 assists per contest. He has previously been named ACC Player of the Week.

Reed has posted 11 20-point outings this season, including a career-high 28 points at Virginia Tech, while also grabbing 10 rebounds in that game. In that game, he tied a program record for making eight 3-pointers in a single game.

He is currently the program leader in free throw percentage (87.2 percent). He also achieved the program’s 26th “Triple Leadership” all-time. He led the Tigers in points (20), rebounds (8) and assists (5) in Clemson’s win over North Carolina.