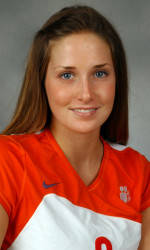 GREENSBORO, N.C. – Clemson volleyball players Leslie Mansfield and Meghan Steiner were selected to the 2006 All-Atlantic Coast Conference Academic Volleyball Team, as announced today by Commissioner John D. Swofford. The pair helped Clemson to a 20-win season as the Tigers finished with a 20-10 overall record and a 15-7 mark in conference play.

Steiner, a junior from Crystal Lake, IL, started all 30 matches for Head Coach Jolene Jordan Hoover this past season. The middle blocker ranked second on the team with a .340 hitting percentage and with 128 total blocks, trailing only All-American Danielle Hepburn. Steiner also recorded 295 kills in 2006, setting a career high with 21 against 25th-ranked Duke in October.

Mansfield, who served her second term as co-captain last season, was also a 30-match starter in 2006 as the team’s most versatile player. A native of St. Charles, IL, she led the Tigers with 35 service aces and ranked second on the team with 338 defensive saves. Mansfield tallied 101 set assists and posted 233 kills on the year, while hitting a .234 percentage. Her 82 total blocks as the right-side hitter were also third-most on the team.