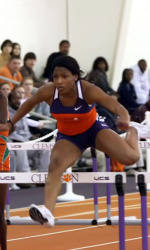 Blacksburg, VA – Patricia Mamona won the triple jump Saturday to highlight the final day of action for Clemson track & field at the Virginia Tech Elite Meet. Mamona jumped 43’7″, which is an NCAA provisional qualifying mark, her third of the weekend in as many events.

Mamona, who also qualified provisionally for the NCAA Indoor Championships yesterday in the 60m hurdles and long jump, held off teammate April Sinkler for first place Saturday. Sinkler, a native Virginian, jumped 41’7.75″ which is also an NCAA provisional qualifying distance. Mamona’s 43’7″ jump matches her career-best in the indoor setting.

Jacoby Ford, fresh off tying his ACC record in the 60m dash on Friday, was runner-up in the 200m dash Saturday. He slightly improved on his personal indoor best in the event, running a 21.33. His time ranks 10th in school history. Trenton Guy placed fifth in the event with a time of 21.77. Kristine Scott was sixth in the women’s 200m dash (24.50).

Chris Slate had a solid outing in the mile run, winning his section and finishing seventh-best overall. Slate crossed the finish line with a time of 4:19.09. In the women’s mile, Lilla Fördós was the team’s top finisher with an 18th-place showing and time of 5:11.95. The women’s 4x400m relay team put together a season-best time of 3:44.63 and won the open section of the event to close the meet.

Caroline Kennedy and Amy Morrison both cleared 12’0.75″ in the women’s pole vault, finishing third and fourth respectively. Emily Barlage was sixth with an 11’7″ clearance. In the men’s vault, junior Chris Spear cleared 16’11” and finished fourth against a strong field of competition.

Josh Fowler competed in the men’s triple jump for Clemson and produced a seventh-place finish. He jumped 48’3.25″ in his first triple jump effort of the 2009 indoor season. Stephen White also finished seventh in the field events for the men’s team, as he put together a shot put toss of 50’7.25″. Alex Padgett fouled on each of his three attempts in the event.

The Tigers return to action next weekend with a couple of different meets. Selected student-athletes will travel to Fayetteville, AR for the Tyson Invitational, while Clemson will also play host to the Tiger Paw Invitational on Friday and Saturday.