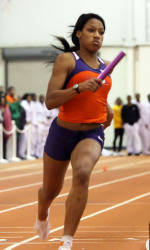 Mamona hit the automatic NCAA standard in five of her six attempts Saturday, and on her sixth and final jump she produced a personal best at 45’0.5″. Mamona was actually the runner-up in the event to Florida’s Shara Proctor. Teammate April Sinkler placed third, posting an NCAA provisional mark of 42’10.25″.

The other major highlight from Saturday action was Clemson’s victory in the women’s 4x400m relay. The Tigers compiled a time of 3:38.62, their third NCAA provisional time this season in the event. Sparked by an impressive 53.73 quarter mile split from third leg Sonni Austin, Clemson took first over hometown favorite Virginia Tech. The lineup consisted of Brittany Pringley, Brianna Rollins, Austin and Jasmine Edgerson.

The men finished fourth in the 4x400m relay. The team of La’Mont Jackson, Jordan Rispress, Miller Moss and Spencer Adams put together a time of 3:16.07 on Saturday. Rispress put together a stellar second leg, turning out a quarter mile split of 47.70.

Stormy Kendrick was third in the women’s 200m dash invitational. The freshman from Gastonia, NC clocked a time of 24.20 and was edged at the line by a Florida sprinter in the opening heat. Kristine Scott (24.49) was seventh in the event.

The women’s distance medley relay was runner-up Saturday, producing a time of 11:53.82. The team of Candace Sapp and Kim Ruck established the third-best women’s DMR time in Clemson history at the Rector Field House. The men followed with a third-place effort and season-best time of 10:01.32. The men’s lineup was comprised of Jasen Turnbull, Ryan Mangone, Will Noble and Chris Slate.

Clemson received mixed results out of the pole vault. Xavier Tromp, one of the top performers in the ACC, did not clear a height. Moss, fresh off a strong provisional NCAA qualifying total last weekend in the heptathlon, cleared a lifetime best 15’6.25″ and was 12th against an outstanding field.

The teams return to action next weekend with the Tiger Paw Invitational at home, while select student-athletes will travel to Fayetteville, AR for the Tyson Invitational.