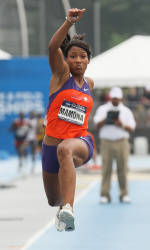 DES MOINES, IA – Tina Krebs who won three in the 1980s. Mamona’s performance elevated the Tiger women’s team to a tie for ninth place after the third day of the national meet.

“Our kids fought hard in adverse conditions today, and they have throughout the meet,” said Lawrence Johnson, Clemson’s Director of Track & Field. “Kids were going back and forth between warmups and competition due to all the rain, but what they accomplished today was simply amazing.”

Mamona, who graduated from Clemson in May, had the top mark the entire way through the triple jump competition. On her second jump of the prelims, she hit a mark of 45’2.5″ that would have been enough to win the event. However, on her first jump of the finals following an hour-long rain delay, she was even better with a leap of 46’1.25″ to run away with the championship. It was the 10th NCAA track & field event championship won by a Clemson female.

“Winning meant a lot to me because I finally got to focus on the triple jump after competing in so many different events at the ACC Championships,” Mamona said. “When I hit the finals I was loose; it takes a while to warm up. It was my last competition as a collegiate athlete and I just wanted to finish well. I was looking forward to an NCAA meet record (14.07m). I was two centimeters off, but I’m still happy with my second NCAA title.”

“Patricia was amazing,” Johnson said. “We had a plan, and she executed beautifully. You couldn’t have asked for a better ending for her career, as she was able to defeat her nemesis Kimberly Williams of Florida State. Those two have gone at each other for years, and she was fortunate to get the best of her today.”

Liane Weber was national runner-up in the heptathlon. The Wangen, Germany native saved her best national meet performance for last. It was a sweet ending for Weber, who missed all but one event of the heptathlon a year ago due to a tendon injury. She tallied 5,857 points – her best since the 2010 ACC Outdoor Championships. Weber’s performance earned eight points for the women’s squad.

Weber, a December graduate, came out of the gates strong on Friday. She posted a long jump of 19’1.5″ and followed with the best javelin throw of the entire field. The All-ACC javelin thrower produced a throw of 148’5″ on her third and final attempt. Weber had the third-best time in the 800, the final event. She ran a time of 2:16.57, a season-best, to secure the silver medal. It was the best finish ever at the NCAA meet by a Tiger female in the multi-events.

“Liane had a great temperament this entire weekend,” Johnson said. “We’ve been waiting on her to come into her own, and she did that today. She was in the stands injured last year, and that hurt her. She fought so hard this weekend. I couldn’t be more proud of her.”

Miller Moss made an impressive run at a second NCAA championship, but came up just short in the decathlon. He did, however, record a personal best by a wide margin and finished the grueling 10-event slate with 7,996 points. He was the leader through eight events, but was overtaken in the javelin by eventual winner Michael Morrison of California. Moss put together a top throw of 163’5″ on Thursday, but was unable to improve it Friday.

Moss ran anchor leg for the Tigers’ 4×400 relay in the semifinals before completing the decathlon with the 1500-meter run. He had a time of 4:44.71 in the final event to fall just four points shy of his goal for the season – 8,000 points. In the end, it was a stellar season for Clemson’s most decorated decathlete in history. He won an NCAA and ACC crown in the heptathlon, earned his degree last December, and established lofty records in both the indoor and outdoor multi-event competitions.

“Miller is the best male athlete to come through Clemson in my opinion,” Johnson said. “I wouldn’t have asked anyone else to run on our 4×4 today, and complete the decathlon. He has super character and integrity, and he exemplifies `Solid Orange’ all the way.”

April Sinkler and Lauren Terstappen also competed Friday. Sinkler was 14th in the triple jump with a mark of 41’6.5″ on her third and final attempt of the preliminary round. Terstappen, a freshman from Pennsylvania competing in her first national meet, did not clear the opening height in the pole vault.

The women’s team will return to action for running finals in three events on Saturday, all of which will be shown live by CBS. The 4×100 relay will race at 1:03 PM, followed by Alyssa Kulik in the steeplechase final at 1:54. Michaylin Golladay will compete for the national championship in the 100 hurdles at 2:09 PM.