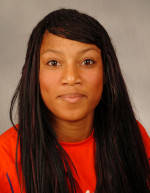 Clemson women’s track & field athlete Patricia Mamona won three events at the Portuguese Junior Championships over the weekend. The freshman from Lisbon claimed titles in the 100m hurdles, long jump, and triple jump. She will next compete at the European Junior Championships from July 19-22 in Hengelo, Holland.

Mamona improved by sixth-tenths of a second in the 100m hurdle final to post a time of 14.16 and run away with the event title. Her effort of 18’8.5″ in the long jump also was good enough to claim first-place honors. Mamona’s specialty event, the triple jump, was also a landslide victory. She had an impressive mark of 43’5.25″, just shy of her personal best in the event.