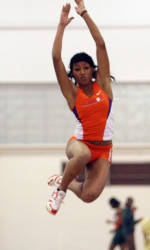 Blacksburg, VA – A pair of NCAA provisional performances in the women’s triple jump highlighted day one of action for Clemson track & field at the Hokie Invitational. In addition, four student-athletes amongst the men’s and women’s teams improved on their position in the Clemson record books with Friday performances, one of which was a school record in the women’s 1000m run.

Patricia Mamona’s effort of 42’10.25″ in the triple jump was good enough for a third-place finish and NCAA provisional qualifying effort. April Sinkler was fourth and moved into a tie for fourth place in the Clemson record books with a mark of 42’4″ in the event. With the mark, the sophomore has now qualified provisionally for the NCAA Championships in the high jump, long jump, and triple jump.

Mamona finished seventh in the 60m hurdles after posting a time of 8.63 in both the preliminary and final rounds. In the 60m dash, Michaylin Golladay was 11th (7.77) for the women and Miller Moss came home 12th for the men (7.03).

Caroline Kennedy won the unseeded section of the women’s pole vault. She displayed her resiliency, as she twice cleared the final bar to earn the victory. Her mark of 12’3.5″ was her first of the season, but she does own a personal indoor best of 12’6″ from last year.

The Tigers had a pair of top-three finishes in the weight throw Friday. Nikola Lomnicka was third in the 20-pound women’s event with a distance of 56’6.5″. The newcomer from Slovakia moved into fifth place on the school’s all-time weight throw performance list.

The Hokie Invitational continues Saturday with the first scheduled event the women’s high jump at 9:00 AM.