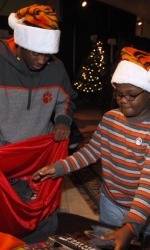 Making a Difference in Children’s Lives

CLEMSON, SC – Demontez Stitt never went without while growing up just outside Charlotte, NC. His mother and grandmother made sure of that as they worked hard to provide him and his six younger siblings with whatever they needed.

“They did their best, especially while I was growing up as a kid, with things that I wanted,” Clemson’s senior guard said. “I had most of the things I needed.”

In his four years at Clemson, Stitt has learned to appreciate those things even more, especially on nights like Tuesday as the Clemson men’s basketball team, along with Bi-Lo, hosted the second annual Tiger Wonderland at Littlejohn Coliseum for under privileged children from Clemson Community Care.

Each of the Tigers entertained a child as they went for sleigh rides around the Clemson campus, through a magical Winter Forest where they made arts & crafts and drank hot chocolate with members of the Clemson cheerleading squad, had a nice home cooked holiday meal, met Santa Claus at the North Pole and then opened multiple presents under his or her own Christmas tree.

“This really puts things in perspective,” guard Tanner Smith said. “Those battles and fights on the basketball court are nothing. There are people fighting much bigger battles than we can ever imagine. To help kids out like this and their families is really something special.

“You can just tell by their faces how much they really appreciate it.”

Tiger Wonderland was made possible by Bi-Lo and Aramark. Bi-Lo provided all the gifts and financial support, while Aramark provided all the food. Thanks to the efforts of event planner Meredith Merritt and IPTAY’s Lindsey Leonard, Bi-Lo graciously donated items from the children’s wish lists to make sure each child had a memorable Christmas.

“My kids live a very privileged life, and like most kids they will have a really good Christmas,” said Clemson Head Coach Brad Brownell, who had his wife and two daughters at Tiger Wonderland. “It’s nice for them to see what we are doing with other kids who may not have as many things. For our kids to spend time with them and to watch them interact with our players and for them to interact with these other kids is as good for them as anything we can do.

“There are a lot of people that do a lot with this, a lot more than me,” Brownell continued. “They set this up, decorated it and prepared the food. A lot of people put in a lot of hours setting this place up to make it look the way it does, so we have all been very blessed that they were involved too.”

For Andre Young, the night was blessed when he got to see the smile on the little boy’s face he was hosting.

“I actually talked to him on the bus and asked him what he wanted for Christmas. He said he wanted a Nintendo DS and a Mario game, and that’s what he got,” Clemson’s junior guard said. “When he saw that, he was just real thrilled. It’s just a good feeling.”