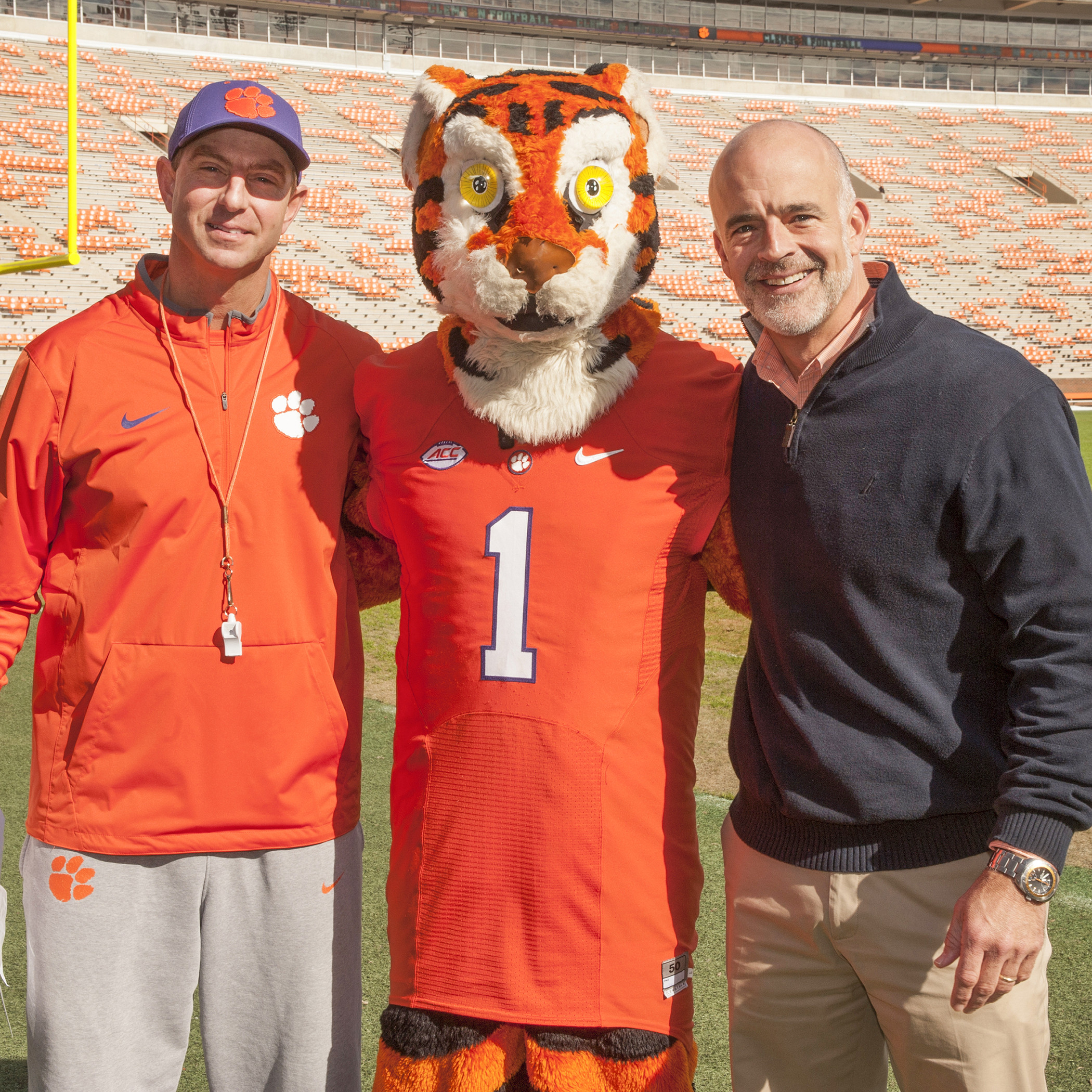 A former Wofford football player. A graduate of Davidson. A starting goalkeeper at North Carolina. A Georgia State alum.

It is probably not a reach to say most Clemson supporters would be surprised to hear that the four aforementioned people are responsible for raising major gift contributions for the athletics department at their beloved institution.

“None of us are Clemson grads, but we’re Clemson at our core, through our values and family-first approach,” said Bobby Couch, director of IPTAY’s major gifts division. “I’ll put our staff up against anyone in the country.”

Couch was hired in 2005 and paired with Clemson legend Jeff Davis in raising funds for the football team’s new front door, the WestZone. He marvels at just how far the idea of major giving has come.

“We raised $127,000 that first year,” he said. “Last year alone, we raised $30 million. We built a culture by expanding on the country’s longest running annual fund.”

After playing football and graduating from nearby Wofford, Couch tried out several jobs before finding a passion for athletics fundraising. His appetite was whetted with a six-month stint in what became NFL Europe. Then, he was in minor league baseball sales for three years.

But believe it or not, it was the health-care industry that ultimately led Couch to Clemson.

“I worked for Greenville Hospital System and met Brian O’Rourke, who was at St. Francis Hospital,” he said. “We cut our teeth on health-care fundraising. Brian ended up returning to Clemson in the development office, and I was his first hire about 12 years ago.”

At the time, Clemson athletic director Terry Don Phillips wanted to take a serious look at investing in a major gifts program to help fund Clemson’s shiniest new facility. Couch accepted an offer to come on board, but within a couple of years, he lost Davis to Dabo Swinney’s staff as director of player relations.

In 2010, he planted the first seed of what has turned into today’s high-impact major gifts division at Clemson.

“We hired Aaron Dunham, and we needed him to get out of the office and see people,” explained Couch. “Aaron is a great relationship builder and people love him. He’s the guy you want at bat with two outs and you need to get that winning run across home plate.”

Dunham completed a work-study program in Davidson’s sports information office, his first taste of college athletics. He went on to earn a master’s degree from North Carolina, where he worked in the business office wearing a multitude of hats.

“They were building the new basketball arena downtown,” he said. “Coach (John) Kresse helped me, so I was having a great time. But once the arena opened, that was the thrust of our main emphasis.”

Dunham was brought on board the same week Brad Brownell was announced as Clemson’s basketball coach in April 2010. The two hit the ground running and sought out a new group of investors for men’s basketball, and the relationship has proven to be more than fruitful six years later.

He helped spearhead the idea of premium courtside seating at Littlejohn Coliseum in 2013, a movement that will expand to an all-new club level when the renovations are complete later this year.

“It gives our fans engagement,” said Dunham. “That’s how you get people to invest even more.”

Ford Williams was a coveted soccer prospect recruited by the previous staff to play at Clemson. An avid NC State fan in his youth, he ended up choosing North Carolina because of the opportunity to play as a freshman.

“I would’ve had to sit behind (All-ACC goalkeeper) Doug Warren,” he admitted. “I was greedy and wanted to play right away.”

While in Chapel Hill, Williams became involved in the student-athlete advisory council, which opened his eyes to the administrative side of college athletics.

After graduating, Williams took an internship that eventually turned into a full-time position at Georgia State, during a time when the Panthers were starting a football program.

“Bobby recruited me to Clemson in 2012,” stated Williams. “I like to tell people that I always wanted to play soccer at Clemson. I told Bobby that I turned Clemson down once before, so I couldn’t do it again.”

Williams oversees Clemson’s fundraising efforts for golf, which includes the annual component known as Golf Paws. Because of his background, he was assigned the men’s and women’s soccer fundraising at Clemson as well.

“Bobby is the loosest of us all, which is great as a leader,” said Williams. “He’s the anti-micro manager. He allows us to go out and do what we think is best to accomplish the goals for Clemson.”

Couch’s next piece of the puzzle was to add a premium seating director. Kyle Shields was hired in 2015 after a career that included event planning and sales in the Georgia Dome, and most recently premium seating coordination at Georgia Tech.

“The product was in a great city in Atlanta, but it didn’t compare to what we have here in Clemson,” stated Shields. “It surprised me Clemson wasn’t already at the forefront with its facilities, but that was good for me. I hit the lottery coming to work here!”

Couch was quick to point out that the biggest difference in premium seating today is that when the WestZone Club level seating first opened, the seats were sold in the same fashion as other areas inside the stadium.

“We refurbished our suites and resold the seats, and that came with not only an annual gift requirement, but also a capital gift,” he said. “Kyle has always been a great serviceperson, but through our premium seating, he has gained and developed great sales experience as well.”

Couch and his team focus most of their attention on determining what connects potential investors to Clemson. He charges his employees with gaining a better understanding of what motivates IPTAY members to invest in the ongoing capital projects.

“We’re orchestrators of enhancing that experience,” he said. “That’s why we brought in Janice Cantinieri recently from donor services on campus. She’s our director of stewardship. It’s about making people understand how much we appreciate the impact of their gifts. She and Connie Gilreath are essential to our team. Connie is the hardest worker in our office and keeps us organized.”

The major gifts team has come a long way since raising just over $100,000 that first year. And it has been done by a myriad of members who do not hold degrees from Clemson, but rather by members who embody the “Clemson Family” values representing the department of athletics.