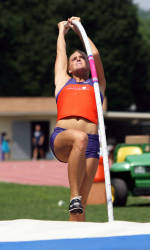 Atlanta, GA – Clemson wrapped up its regular season in track & field Saturday at the Georgia Tech Invitational. The Tigers had three regional-qualifying performances over the weekend at the George C. Griffin Track Complex.

The 4x100m relay team took first place Saturday with a time of 39.36. Clemson’s group consisted of C.J. Spiller, Trenton Guy, and Jacoby Ford. The Tigers will enter the East Region Championships one of the favorites to advance to the national meet.

Kat Majester added her name to the list of regional qualifier from Clemson. She was runner-up in the pole vault with a personal best clearance of 12’7.5″. She still ranks fifth in school history in the pole vault. Caroline Kennedy (12’1.5″) finished fifth Saturday, but she will also compete at regionals in the event.

Kristine Scott ran a time of 23.98 in the 200m dash and was seventh overall in the event. She has qualified for regionals in both the 100m and 200m dash events.

In Friday action, Alex Padgett continued his emergence in the throws. He established a personal best in the hammer throw with a mark of 197 feet. Padgett placed fourth in the event at the meet. He also competed in the shot put, finishing ninth with a throw of 52’2.75″. He will compete at regionals in both events in two weeks.

The NCAA East Region Championships are next on the schedule for the Tigers. The meet will be held May 29-30 in Greensboro, NC. The top five finishers in individual events and top three relay teams will move on to the NCAA Championships in June.