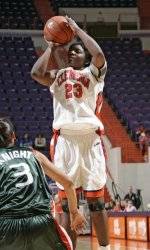 ORONO, ME – Amanda Tewskbury hit a jumper as time expired to give her Maine Black Bears an 80-78 victory over Clemson in the Dead River Company Classic Championship game on Saturday. Lady Tigers D’Lesha Lloyd and Lele Hardy were named to the all-tournament team as Lloyd led Clemson in scoring in both games and Hardy totaled 28 points and 19 rebounds in the tournament.

The Lady Tigers fell to 2-4 on the year while Maine improved to 4-1 overall.

Lloyd was 8-13 from the field to lead Clemson with 16 points, and Hardy collected a Lady Tiger high 10 rebounds. Christy Brown also scored in double figures with 14 points on the night.

The Black Bears’ Bracey Barker led all scorers with 24 points and had a team-best seven rebounds, while Ashley Underwood finished the night with 22 points.

The Black Bears scored the first points of the night and held an early 8-4 advantage in the game. The Lady Tigers scored the next nine points, taking their first lead on a three-point play by Taylor, to go up 13-8. Back-to-back three-point field goals by Carrie Whitehurst put Clemson on top by 10 points with 9:28 remaining in the half.

Maine, however, cut the deficit to three points at 26-23 after a nine-point scoring spree by Barker. Another Barker jumper at the 3:07 mark tied the game at 34-34, and the Black Bears posted the next point on a free throw by Hugstad-Vaa to regain the lead. The Lady Tigers went back ahead, 40-37, on a three-point play by Adrianne Bradshaw with 1:14 remaining, but Maine took a one-point advantage into the halftime break after converting four free throws in the final minute.

The two teams were tied early in the second period at 50 apiece before the Black Bears went on a 20-11 run, during which they hit five three-pointers, to go up by nine with just under eight minutes remaining. Clemson cut their lead to two points at 74-72 on a Brown three-pointer with 3:27 left. A three by Whitehurst then gave the Lady Tigers the one-point lead one minute later.

Underwood hit two free throws at the 2:11 mark to put Maine back on top, 76-75, and then converted two more with 25 seconds left on the clock to give the Black Bears the three-point advantage at 78-75. Brown then drained another three-pointer to tie the game with 11 seconds remaining, but Tewksbury hit her shot as time expired to give Maine the win.

Clemson will return to Littlejohn Coliseum next Wednesday, Nov. 30 as the Lady Tigers will play host to the Furman Paladins. The teams are scheduled to take to the court at 7:00 pm.