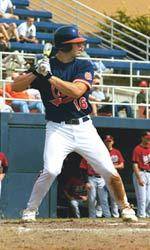 Collin Mahoney’s two-run home run in the eighth led a comeback charge and helped Clemson to a 6-5 victory over Georgia Wednesday night before 4, 645 fans at Doug Kingsmore Stadium. Clemson improved to 28-3 while dropping Georgia to 18-11. Head Coach Jack Leggett improved to 8-0 against Georgia at home as the Tiger skipper.

Clemson avenged its 5-4 loss at Georgia Tuesday night after falling behind 4-0 for the second straight game. Lee Mitchell’s two-run double to right started the scoring in the first inning for Georgia and a two-out single by Adam Swann put the Bulldogs ahead 3-0. The scoring continued in the second inning when a walk by Marshall Szabo preceded singles by Chaz Lytle and Kris Edge to give Georgia a 4-0 lead.

The Tigers loaded the bases with one out in the fourth inning. Collin Mahoney’s sent the first pitch deep to right and over the fence. However, the ball crossed the fence near the fair pole and was ruled foul. Mahoney struck out to end the Tiger threat.

Clemson finally got on the board in the fifth. David Slevin singled to lead off the inning and came home on designated hitter Khalil Greene’s double to left-center. Greene, who is playing in his 232nd game as a Tiger, started at DH due to strained rib cartilage. A hit by Jeff Baker put runners at the corners with one out, put consecutive strikeouts by Russell Triplett ended the Tiger rally.

Reliever Bill Sharpton silenced the Tiger bats through the middle innings. He entered the game in the third inning and struck out eight batters over five innings. The Clemson offense finally broke through in the eighth inning. Baker doubled to lead off and scored on Triplett’s single to left. Jeff Hourigan’s double to deep center plated Triplett to trim the deficit to one.

L.J. DeMaino popped out to second to bring up Mahoney. The catcher, who nearly hit a home run earlier in the game but struck out in his first three at bats, left no doubt on the 0-1 pitch and crushed it to right center, putting Clemson ahead for the first time. Slevin walked, stole second and scored on Frank’s bloop single for what turned out to be a critical insurance run to end the scoring in the eighth.

Jeff Hahn (1-0) earned the first decision of his career. He combined with reliever Tyler Lumsden to pitch six hitless innings to keep the Georgia offense at bay. Paul Harrleson closed out the ninth for his seventh save of the season.

Clemson will now travel to North Carolina in an early season showdown for first place in the ACC. First pitch Friday is scheduled for 7:00 PM.