CLEMSON, S.C. — Women’s lacrosse Head Coach Allison Kwolek has added the first member of her staff in Madison Carter, the team announced Tuesday. Carter was a standout at Penn State, where she graduated from in 2019 with a degree in rehabilitation and human services as a two-time IWLCA All-American.

A native of Davidsonville, Md., Carter lettered all four seasons at South River High School and earned an Under Armour All-America Lacrosse nomination as a senior. She was also named to the U.S. Lacrosse All-America team in 2014.

At Penn State, Carter set the school record for goals in a sophomore season (70). That mark was best in the Big-10 and 10th in the nation for the 2017 season. She graduated as the school’s fifth all-time leading scorer (197 goals). Her 218 career points place her seventh in Nittany Lion history, and makes her one of just 15 Nittany Lions to surpass the 200 point mark.

“I am excited to have Madison join me at Clemson,” said Kwolek. “I have known Madison since her recruiting process in high school and the thing that has always stood out about her is how great a person she is. Her playing experience at the Power 5 level and her leading Penn State to two Final Fours makes her right at home here at Clemson. Madison’s elite level talent on attack and her experience on the draw will be a great asset to our players.  Her energy and passion for the game of lacrosse will serve Clemson well as we look to build our program.”

For all of the most up-to-date information regarding Clemson women’s lacrosse, be sure to reference clemsontigers.com and follow @ClemsonWLax on Twitter. 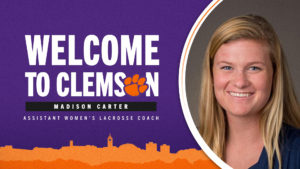