CLEMSON, S.C. — Winning its fourth-straight home game in dramatic fashion, the Clemson University men’s basketball team pulled out a thrilling 1-point victory over Syracuse on Tuesday. The Tigers won 71-70 versus the Orange at Littlejohn Coliseum, and a layup by Clyde Trapp with two seconds remaining served as the winning basket.

The Tigers’ efforts were manned by Tevin Mack and Clyde Trapp, who put together arguably the best performances of their respective Clemson careers. Mack was a force to be reckoned with on the night, knocking down shot after shot from the elbow and extending possessions with pivotal offensive rebounds. The veteran scored a career-high 32 points via a career-best 12 field goals. Additionally, Mack was 7-of-8 at the charity stripe and pulled down 10 rebounds for his first double-double in a Tiger uniform. He became the first Clemson player to score at least 32 points since Jaron Blossomgame dropped 32 in 2016. Furthermore, Mack’s 32 points were the most scored by a Clemson player in a conference tilt at home since Ed Scott scored 36 at Littlejohn in 2002. As for Trapp, on top of his late-game heroics, he set new career-best marks for himself in points (17), rebounds (9), assists (6) and field goals (6) in his 35 minutes of action.

Trapp came out firing, knocking down back-to-back 3-balls Clemson’s first two times down the floor. The Tigers went on to lead by as many as nine points in the first half, as Clemson was up 15-6 on Syracuse at the 13:47 mark of the first half. Syracuse eventually led 25-20, thanks to a 9-0 run, and both teams traded treys on four consecutive possessions late in the first. The Orange sported a 35-33 lead at halftime, and Syracuse was hot out of the intermission, stringing together a 10-2 run en route to going up 45-35. Buddy Boeheim and Elijah Hughes led Syracuse with 22 points apiece.

Mack took over the game at that point, single-handedly manufacturing an 8-0 run that pulled the Tigers to within one of the Orange at 50-49. That was part of a larger 12-2 run that provided Clemson with its first lead of the second half. Down the stretch, Syracuse led 70-67 as a result of a 3-point shot with 1:34 remaining. Aamir Simms proceeded to connect on a jumper that decreased Clemson’s deficit to one point, and a crucial defensive rebound by Khavon Moore with seven seconds on the game clock set up the frenetic winning play. After receiving a feed from Moore on the baseline, Trapp drove in for a contested layup that went Clemson’s way and sent shock waves through the arena. The Orange were held in check in the final seconds, and the Tigers came away with a 71-70 win that snapped Syracuse’s 5-game winning streak.

Next up for the Tigers is a matchup on Saturday, Feb. 1, against the Wake Forest Demon Deacons (9-10, 2-7). Clemson defeated Wake Forest 71-68 at Littlejohn on Tuesday, Jan 21. Saturday’s contest at Lawrence Joel Veterans Memorial Coliseum in Winston-Salem, N.C., will tip off at 8 p.m. and air on ACC Network.

Head Coach Brad Brownell
Opening statement:
“What a great game. I’m really proud of our guys. It was a game of runs. Syracuse made adjustments after we got off to a great start. They were outstanding late in the first half. Our guys rallied and got back in the game. We had a couple of bad possessions the last few minutes. Our defense won us the game in the second half. Our defense was outstanding.”

On the winning play:

“It was a tremendous play we’ve used late in a couple of games now. Khavon [Moore] can definitely guard guards. When he got the rebound, I saw him bring it up. The best thing we can do is play well in the transition game and beat the zone. That was an unbelievable finish by Clyde [Trapp].”

On the performances by Tevin Mack and Aamir Simms:

“He was unbelievable. It started with him getting a couple of offensive rebounds. I was on our guys about getting ‘hustle points,’ and that got Tevin going. Obviously, we started moving him down low. Aamir struggled at times but came back and played well at the end. I thought his defense was terrific. He played a great defensive game for us.”

“He was phenomenal. A couple of the 3-pointers he made early got us going. I thought he played great at the end and showed great poise and confidence. He hung in there. That was a lot of minutes for him right now.”

“This was a big-time win. Syracuse had won 8-out-of-10. They’ve got guys who can beat you off the dribble, and if they make a couple of shots, they’re going to make a game out of it. But I think that’s as well as we could’ve played against the zone.”

“I had a good time playing there tonight. There was a lot of space in there. My teammates

found me, and I’m thankful they found me. I was able to make some plays down the stretch and help us get the win.”

On his success attacking the basket:

“We worked on that a lot in practice this week, getting the ball in the high post and the low post to get some easy baskets against the zone. That was the focal point in practice. Also, when I got hot I kept going with it.”

On the keys to his performance:

“Against the zone, I felt like it was easier for me because I had more space. When I got the ball, I had time to face up, make decisions and make the right play.”

On the game-winning shot:

“Everybody wants to hit the game-winner at the collegiate level. Just making the winning play … I feel like I am one of the older guys in this group, so I just wanted to make a winning play and seal the deal for us.”

“Everybody on this team contributed. I think that’s our strength. I think we have 12 guys who

can come out here and surprise anybody. Hunter [Tyson], in the last couple of games, had 20 and Tevin had 30 tonight. We can all step up and make big plays, and that’s what Khavon did tonight.”

“I thought we played a good game. We had a dead spot in the second half, and we didn’t get that many trips down the floor. We just made some mistakes you can’t make. Clemson is a good team, a good defensive team. It’s not that easy to play against them.” 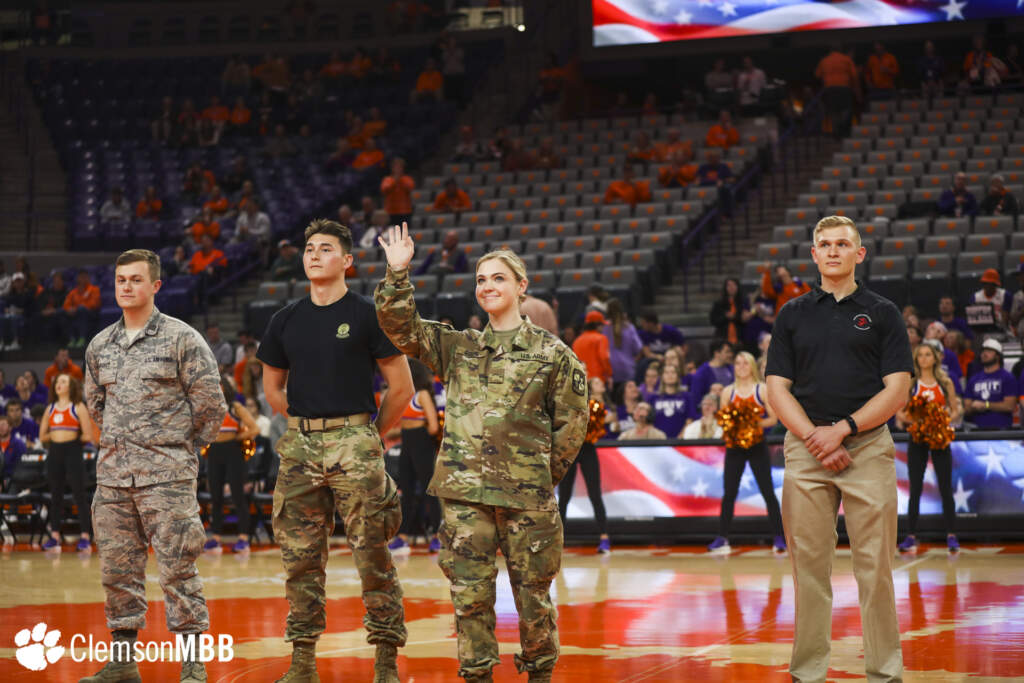 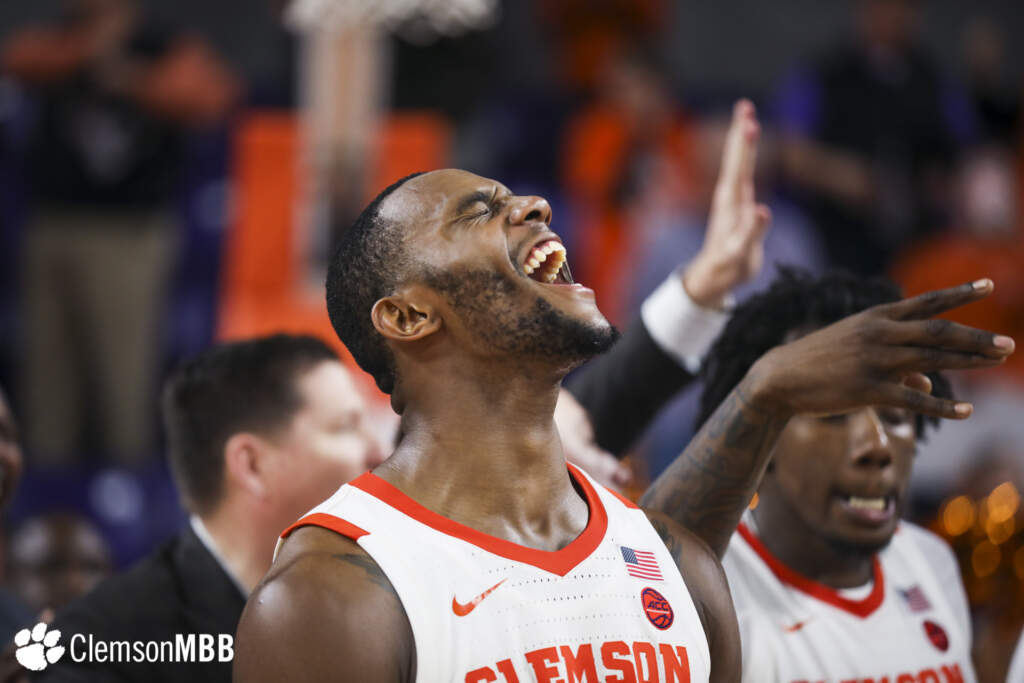 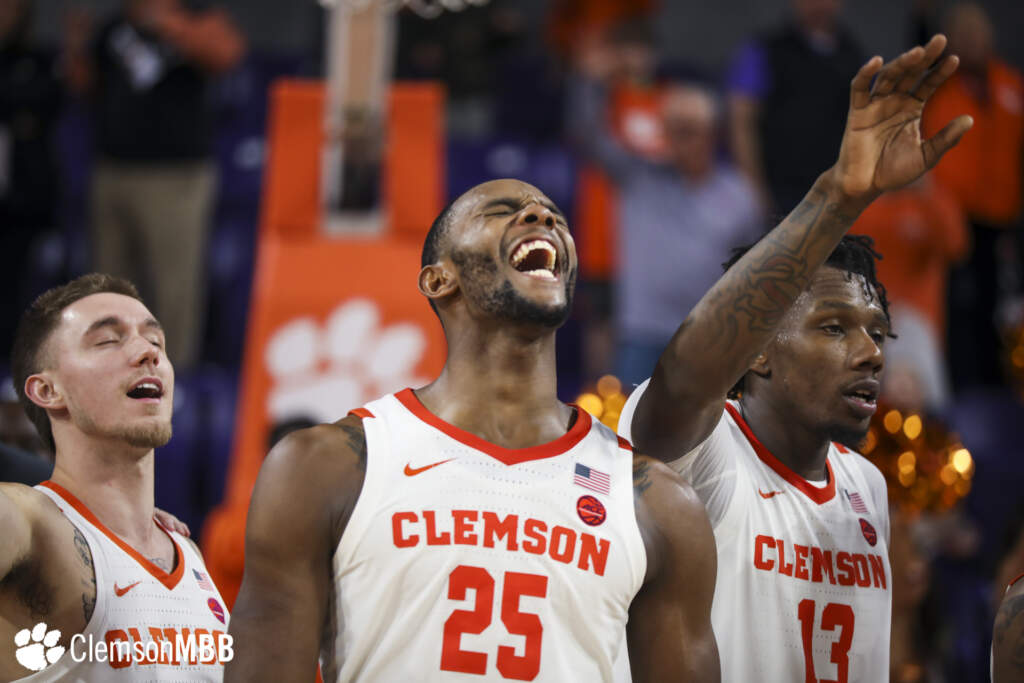 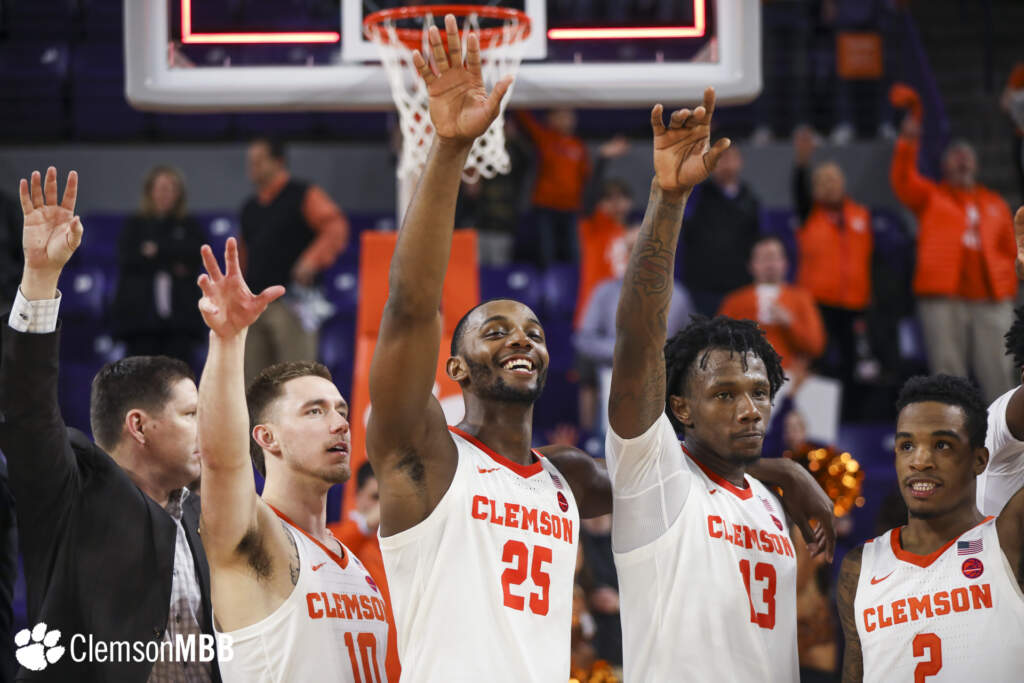 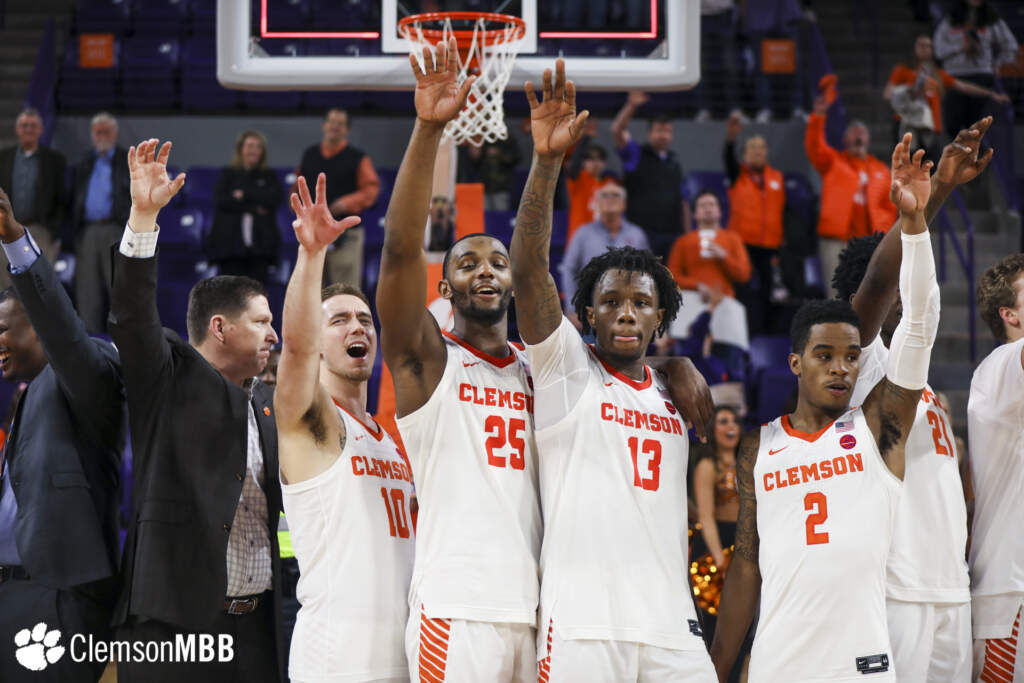 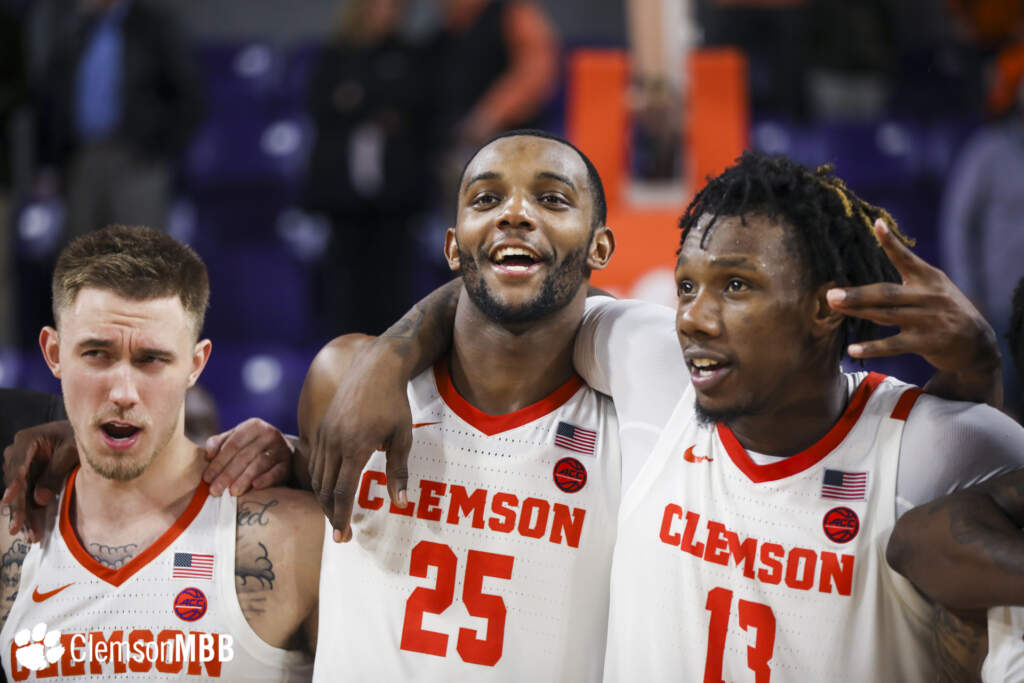 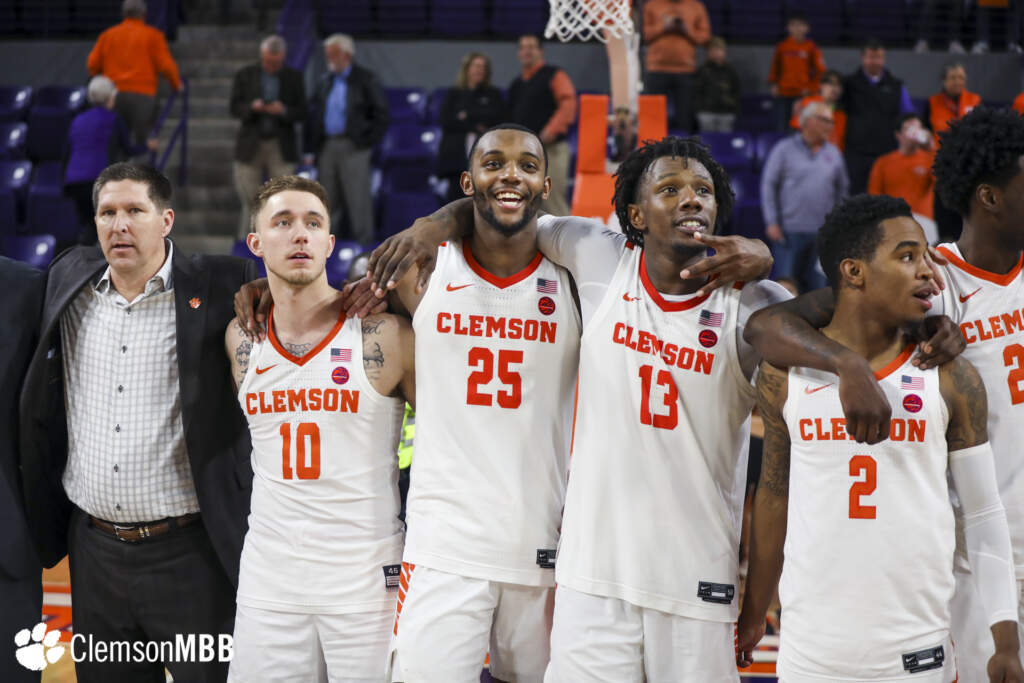 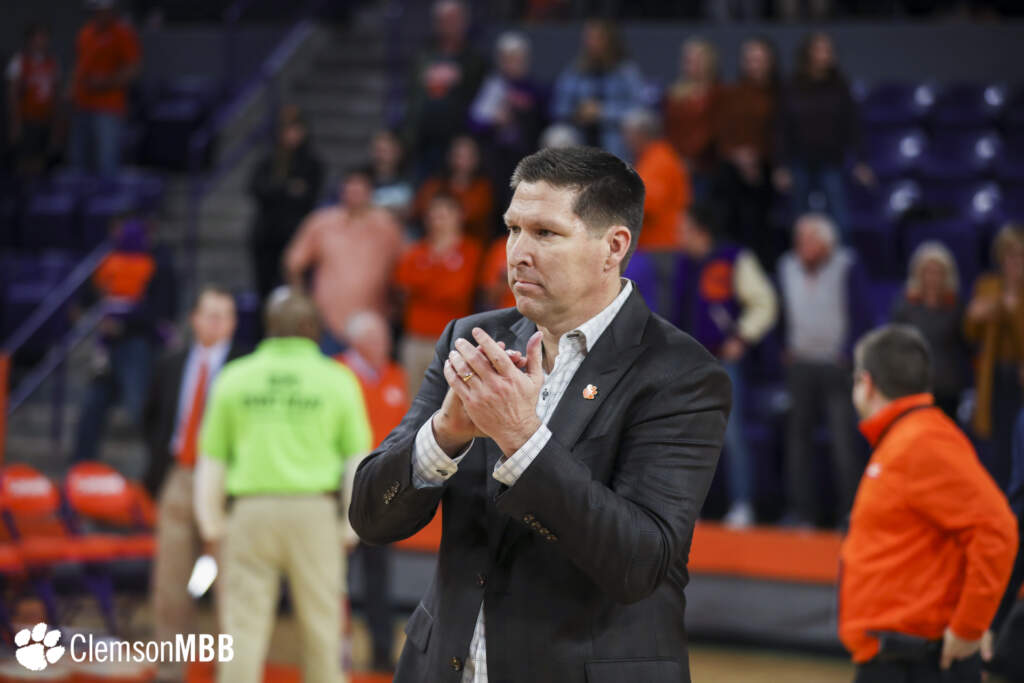 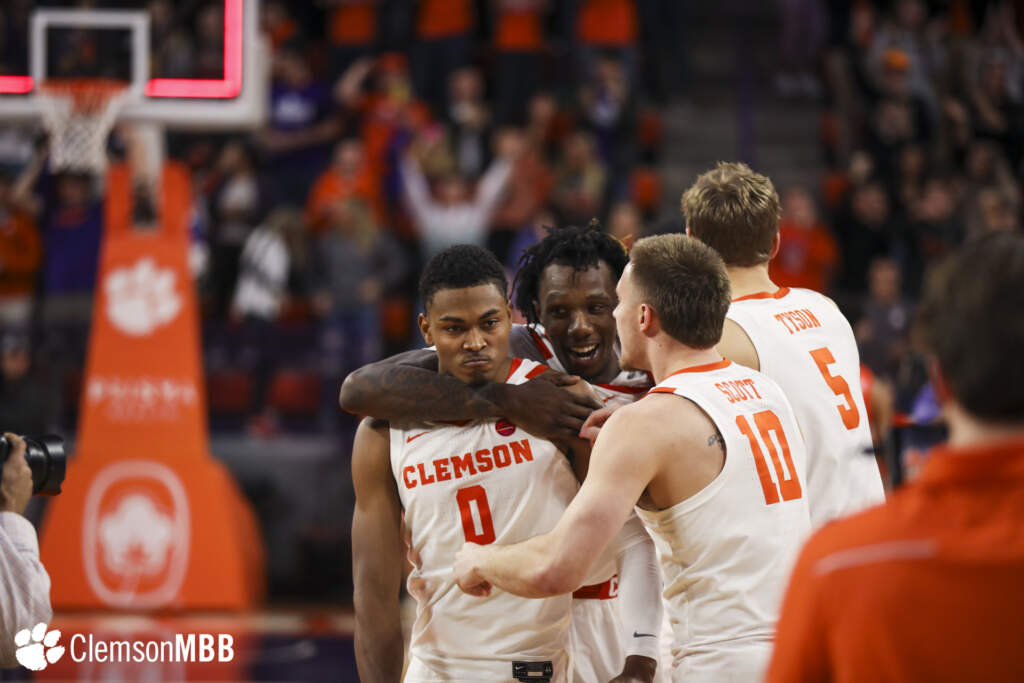