Many Clemson student-athletes have been recruited from large cities like Atlanta, Charlotte, Columbia or Greenville. But Tiger standout pitcher Mack Anglin hails from the small town of Marengo, Ohio, which has a population of less than 300 people.

Sports were always a large part of Anglin’s childhood, as his father played football at Muskingum. Growing up in Marengo, if you wanted to stay active, sports were a natural outlet.

“You either played basketball or baseball,” said the righthander.

Anglin attended a small public high school outside of Marengo, Highland High School, where he played both sports. He was coached by the well-known and respected Donnie Kline. Anglin credited much of his success to Kline.

“He taught me skills that will stick with me the rest of my life. He is a college coach coaching high school.”

At Highland High School, Anglin lettered four times in baseball and four times in basketball, as he scored over 1,000 points on the hardwood. Although it was unconventional, Anglin explained how playing both sports made him more of an athlete, as he was able to incorporate skills from one sport into the other.

The recruiting process was relatively easy for Anglin. After attending a few showcases across the country and topping out at 90 miles per hour during his freshman year of high school, he was able to receive some Division I offers. Anglin eventually gained national attention as an elite pitcher in the Buckeye State and was named Gatorade Player-of-the-Year as well as a Perfect Game All-American.

When deciding where to attend college, Anglin wanted to choose the school that made him feel the most at home. Clemson reminded him of Marengo and he liked how Clemson’s campus is not near a major town. Clemson made him feel like he was back home, and that is exactly what he was looking for in a college.

In his personal life, #32 enjoys hunting and fishing. Above all, he is truly passionate about his faith, which he considers to be his identity. He incorporates prayer and reflection into his daily routine. Whether he has a good or bad outing on the mound, he does not let that get in the way of his faith.

“I am a man of Christ. At the end of the day, baseball is not my identity.”

He consistently references the Bible verse Exodus 15:2, as it helps him to persevere through adversity. He also remarked how it is unique to be able to share his faith with many of the players on the team. He said it was his faith along with the small-town feel that led him to Clemson.

Throughout his career at Clemson, Anglin has developed in many different areas as a pitcher. Due to the shortened 2020 season, he pitched sparingly during his freshman year. In his second year in 2021, he bounced around as a reliever and starter, spending most of the latter stages of the season as Clemson’s top starter, as he led the team with 75 strikeouts in 56.1 innings pitched.

Anglin was drafted by the Washington Nationals in the 13th round of the 2021 MLB draft. However, Anglin said that returning to Clemson was the right decision.

Anglin has also developed in the classroom, as he is one of the team’s top students as a criminal justice major. He was an ACC Academic Honor Roll member each of his first two years at Clemson.

He referenced how much he has grown with his peers, with his game and with his faith, which is one of the key reasons he came back for the 2022 season.

Anglin is mainly a fastball, curveball and slider-dominant pitcher, but he is looking to add and improve on his changeup. He believes that adding that pitch can bring him a lot of success at the next level. Anglin has reached the upper 90s on the radar gun with an incredible spin rate on his breaking ball over 3,200 rpm, which would rank among the top marks at the MLB level.

When Head Coach Monte Lee was asked in the preseason which leaders he is counting on in 2022, he immediately responded with “Mack Anglin.” Anglin is a part of the squad’s leadership council, which was voted on by his teammates.

When asked about his increasing role on the team, he simply said, “That role is whatever the team needs of me.”

In light of being one of the top prospects in the country, Anglin will never forget his roots and what growing up in Marengo means to him. Whatever obstacles he faces on and off the field, he will continue to use his faith as a moral compass. 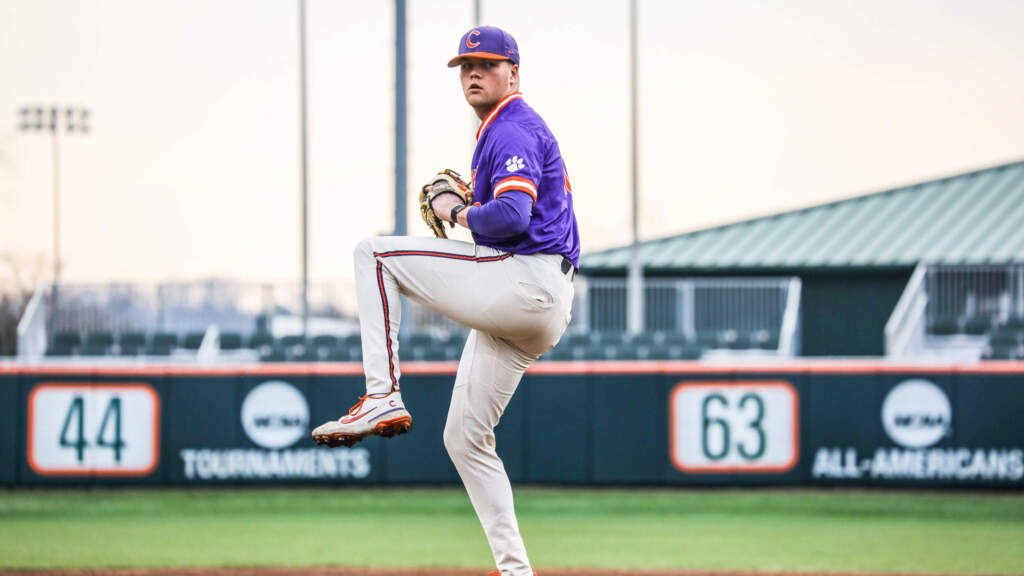