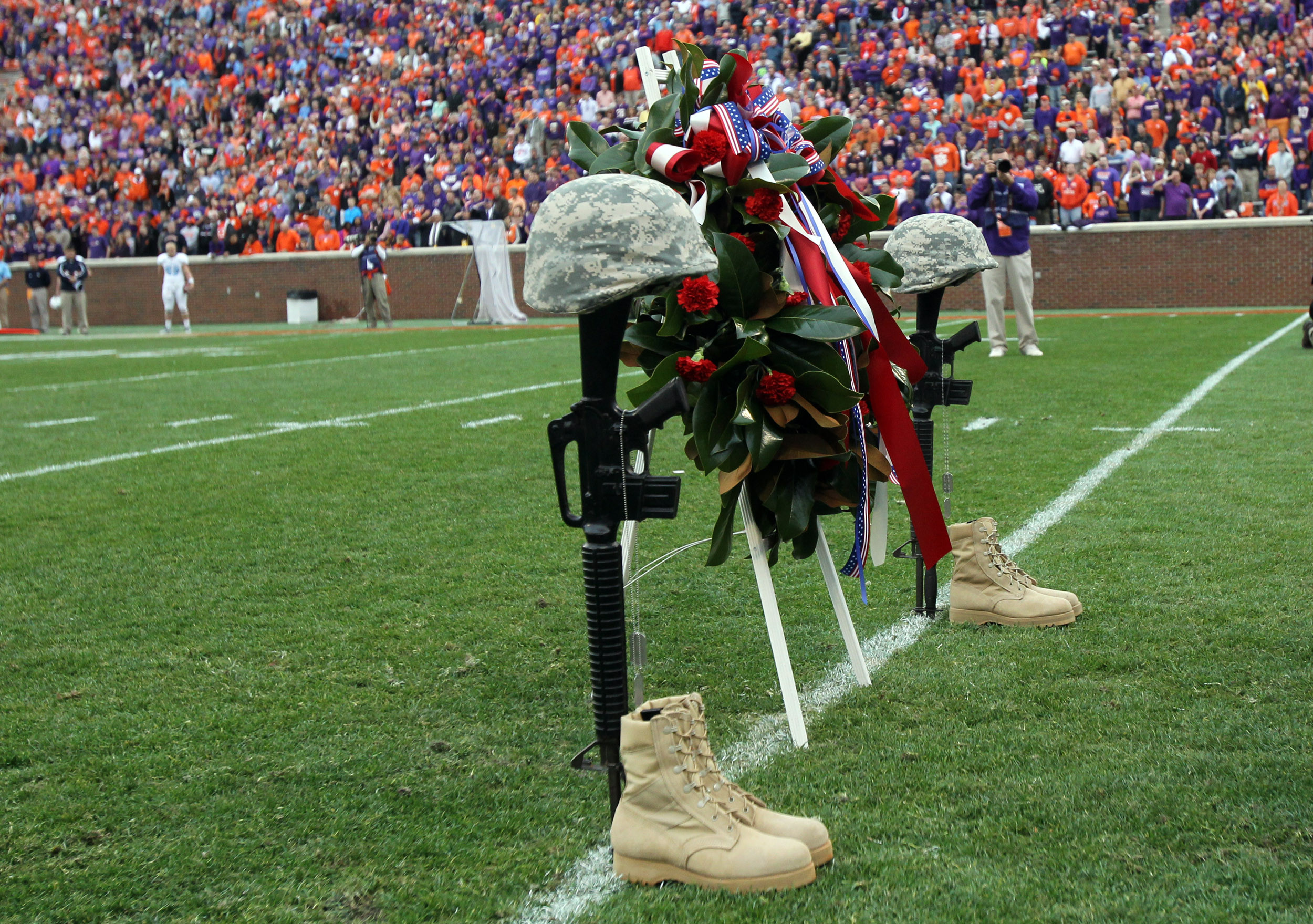 George Hinton Boucher was born April 20, 1913 in Charleston, SC. He is 101 years old. At the age of five, he lost both parents during the flu pandemic. He received a B.S. degree with honors in Agricultural Chemistry in 1934. He was commissioned as a 2nd LT in the Army Reserves through the Clemson ROTC program.

George was called into active service for World War II at the Army Infantry Center at Ft. Benning, GA for the Advanced Infantry Officer’s course, and he began training as cadre for two Infantry Divisions being formed at Blacksburg, VA. He assembled troops  for the D-Day invasion in Europe in an old military camp in England. In 1947 he was discharged with the rank of major. He returned to civilian life and taught in the Anderson, SC public school system.

When the Korean War started George was called to active duty and assigned as an assistant professor of Military Science and Tactics from 1950-1952 at Clemson A&M College, preparing students for military service.  In 1952 he was assigned to the Far Eastern Command and sent to the 5th Regimental Combat Team as Executive Officer, 1st Battalion. He saw action in the Kumhwa and Chosin valleys. The 5th Regimental Combat Team has the distinction of having engaged the enemy in combat 94.4% of its stay on the front line. His unit earned the Presidential Unit Citation, Distinguished Unit Citation, and Republic of Korea Presidential Unit Citation.

George can be proud of the star atop his Combat Infantryman’s Badge. Both his hands were wounded by shrapnel, but he did not accept medical assistance or accept a purple heart because he felt it was part of his job for which he did not deserve special recognition. He is an expert in hand-to-hand combat and an expert marksman. He was chosen by his men to compete for the rating of Expert Infantryman. He earned fourteen medals and awards, including the Bronze Star with Oak Leaf Cluster and V for Valor twice. He was later chosen to receive the Order of Saint Maurice.

He returned to the States and was assigned to Headquarters, Ft. Jackson, SC where he established communication and educational facilities. After leaving Ft. Jackson in 1955, he was assigned to the Pentagon where he was advisor to the Army and Air Force Joint Welfare Board and Custodian of the Army Central Welfare Fund, the Mess Fund, and the Historical Fund. This was followed by an assignment in 1959 to the G-2 Section, Second Army, Fort Meade, Maryland where he was involved in security matters. He developed curriculum for the Defense School.  He is FBI qualified, but chose to remain military. As one of his duties, he investigated and issued security clearances for the Second Army and the Military District of Washington, including for the White House. From 1962-1964 he served as Commanding Officer of the U.S. Army Depot at Bussac-Foret, France.  In 1964 he was assigned to the G-3 Section, US Communications Zone in Orleans, France.  George retired in 1966 and returned to teaching in the Anderson, SC public school system. He later worked as a stockbroker and investment specialist.

He has regularly attended Clemson football games with his family and friends. He is a member of IPTAY.

He has encouraged many young people to attend Clemson by hosting them for football games and giving them his special tour of the campus.  He continues to attend games when he can.

George participated in the National Games and the Senior Olympics multiple times and won seventeen medals in running events of different lengths, including 5K and 10K races.  He carried the International Olympic torch on a leg of its journey to Salt Lake City, Utah for the 2002 International Winter Games.

General Raymond was commissioned through the ROTC program at Clemson University in 1984. He has commanded the 5th Space Surveillance Squadron at Royal Air Force Feltwell, England; the 30th Operations Group at Vandenberg Air Force Base, Calif. and the 21st Space Wing at Peterson AFB, Colo. He deployed to Southwest Asia as Director of Space Forces in support of operations Enduring Freedom and Iraqi Freedom. The general’s staff assignments include Headquarters Air Force Space Command, United States Strategic Command, the Air Staff and the Office of Secretary of Defense. Prior to his current assignment, General Raymond was the Director of Plans and Policy, Headquarters United States Strategic Command, Offutt AFB, Neb.

Lieutenant General  Mick Kicklighter served in the Army for over 35 years; he commanded every level from platoon through Army Division. His last two assignments on active duty were Director of the Army Staff and was Commanding General of the U.S. Army, Pacific. He served for more than 17 years in senior civilian assignment, one of which was Inspector General of the Department of Defense (DoD), 2007 and 2008.

In October 2005 he was selected by the Secretaries of State and Defense to establish and direct the Iraq/Afghanistan Joint Strategic Transition Planning Group. In 2003, he was Director of DoD’s Iraq Transition Team that, together with the Department of State, planned the inactivation of the Coalition Provisional Authority and the establishment of the new U.S. Mission Baghdad.

He had two tours of duty in Vietnam.

Lieutenant General William B. Caldwell, IV retired from the United States Army on November 1, 2013. Prior to his retirement he served as Commander of United States Army North (Fifth Army) from December 2011 to September 2013. His assignment previous to that was as Commander, North Atlantic Treaty Organization Training Mission-Afghanistan and Combined Security Transition Command-Afghanistan during OPERATION ENDURING FREEDOM from November 2009 to November 2011. His responsibilities entailed the oversight of establishing a legitimate, sustainable and effective Afghan National Security Force comprised of the Afghan National Army, the Afghan Air Force, and the Afghan National Police.

Lieutenant General Caldwell was commissioned as an Infantry Officer from the United States Military Academy at West Point in June 1976 with a Bachelor of Science in Engineering. He also earned Master’s Degrees from the United States Naval Postgraduate School and from the School for Advanced Military Studies at the United States Army Command and General Staff College. He also attended the John F. Kennedy School of Government, Harvard University, as a Senior Service College Fellow.

He and his wife, Stephanie, are both originally from Columbus, GA. They have five children.

Colonel Lawrence A. Anyanwu is originally from Nigeria, West Africa.  He is a 1986 graduate of Alabama A&M University, with a Bachelor of Science degree in Finance.  He holds a Masters of Science degree in Engineering Technology from Murray State University in Kentucky.  He also holds a Masters degree in Strategic Studies from the United States Army War College, Carlisle, Pennsylvania.  Colonel Anyanwu received his commission in 1992 as a Chemical officer from the U.S. Army Officer Candidate School at Fort Benning, Georgia.

Colonel Anyanwu’s awards include the Meritorious Service Medal (5OLC), the Army Commendation Medal (5OLC), the Army Achievement Medal (3OLC), the Armed Forces Expeditionary Medal and the NATO Medal.  He has also been awarded the Parachutist and Air Assault Badges and was a recipient of the Major General Nathan Towson Medallion for his demonstrated exemplary contribution and service to the U.S. Army Finance Corps Regiment.

COL Anyanwu is married to the former Ms. Sonya Nance of Huntsville, Alabama.  They have three children, Ryan, David and Whitney and six energetic grandchildren.  His son, First Lieutenant Ryan Anyanwu, is a Physician’s Assistant at Fort Bliss, Texas.

Colonel Jeffrey “Pep” DeVore is the Commander, 628th Air Base Wing, Joint Base Charleston, South Carolina. As host to 53 DoD and Federal agencies, the Wing provides unsurpassed installation support to a total force of over 86,000 Airmen, Sailors, Soldiers, Marines, Coast Guardsmen, civilians, dependents, and retirees across both Charleston AFB and Naval Weapons Station Charleston. In addition, the Wing provides mission-ready expeditionary Airmen to Combatant Commanders in support of Joint and Combined operations worldwide. As the commander, Col DeVore is responsible for $5.3 billion in base property and capital assets and controls an annual budget exceeding $172 million.

Colonel DeVore graduated from Kent State University, Ohio and earned his commission through the ROTC program. His staff assignments include tours as Chief, Joint Exercise Division at the NATO Joint Warfare Center in Norway, Aide de Camp and Executive Officer for the Director, Air National Guard and as Chief, Mobility Forces Programs, National Guard Bureau, the Pentagon. Operationally, he commanded the USAF’s first-ever active associate C-130 airlift squadron and also the 746th Expeditionary Airlift Squadron. As a theater airlift aviator, he has flown in numerous combat operations world-wide. Colonel DeVore is a master navigator with more than 4,400 hours in several aircraft including the C-130E/H/J, T-43A, C-17A, and MQ-1B.

Commander Bob Fant a Clemson grad, was on a bombing mission in Vietnam on July 25, 1968 when he was shot down and captured. He was held captive for 56 months prior to his return.

Major William Austin was doing photo reconnaissance over Vietnam in 1967 when his plane encountered intense hostile fire and was forced to eject. Austin was held for six years and finally released in 1973.

Below is a list of Fallen Soldiers from the state of South Carolina who’s families were present to help us honor their lives and service to our nation.

Captain John Reynolds suffered a gunshot wound to the head sustained during a 3-day firefight with Taliban insurgents in the Kajaki District on May 30, 2012.

Corporal Sean Adams is a double amputee resulting from IED blast while serving as the point man on reconnaissance patrols in the Kajaki District on February, 10 2012.

Corporal Nathan Jakubisin is an amputee resulting from IED blast while serving as the point man on offensive clearing operations in the Kajaki District on June 4, 2012.