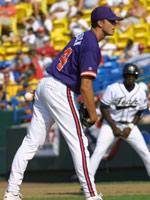 Clemson sophomore lefthander Tyler Lumsden (Roanoke, VA) was named ACC Pitcher-of-the-Week for his performance against #6 South Carolina Saturday. He allowed just four hits and one walk while striking out a career-high 11 batters in 7.1 shutout innings pitched. He shut down a Gamecock team that entered the contest hitting .336. He also did not allow a baserunner past second base the entire game. He improved his record to 2-0, as he has allowed just one earned run and two walks while striking out 14 batters in 13.1 innings pitched this year. Lumsden also defeated #16 Auburn earlier in the season.

In the weekly polls released today, Clemson remained ranked #19 in both the Baseball America and Collegiate Baseball polls, while also remaining at #18 in the Sports Weekly/ESPN coaches’ poll.