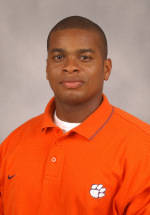 CLEMSON, SC – Clemson Director of Strength Training Joey Batson has announced the addition of Dennis Love to his staff as an Assistant Strength and Conditioning Coordinator for Olympic Sports.

“Dennis has demonstrated the knowledge, work ethic, passion and enthusiasm necessary to have success in this line of work,” Batson said. “The results of his work at Clemson have not gone unnoticed. We are excited to have Dennis on our staff as we continue to grow and expand our professional services to the student-athletes at Clemson.”

During this past year, Love trained the volleyball and women’s tennis teams, both of which claimed ACC titles during their respective seasons. Eight student-athletes from the combined programs were named all-conference while volleyball senior Meghan Steiner was recognized as an NSCA Strength & Conditioning All-American. Love also trained Ani Mijacika, who rose to the #1 singles ranking in the Fila/ITA Tennis poll in 2008 and ranked as the #2 player in the nation in the final poll.

“I’m very excited about remaining at Clemson and grateful to Coach Batson for the opportunity.” Love said. “This opportunity is truly a blessing to continue working with a wonderful group of people.”

In his new position, he will still work directly with volleyball and women’s tennis while assisting with the football team. In conjunction David Abernethy, who is in his fourth year as the coordinator of strength and conditioning activities for Olympic sports, Love will also oversee the training programs for several other Olympic sports.

Before coming to Clemson, Love spent two seasons as a Strength and Conditioning Coach at Catawba College and completed an internship at the Athletes Performance Institute in Tempe, AZ. At Athletes Performance, he worked with professional athletes ranging from football, basketball, baseball, tennis, soccer, hockey and golf. He helped the Athletes Performance Specialists implement strength, speed, agility, flexibility and mobility programs, while assisting with the daily operation and maintenance of the facility.

Prior to his time in Arizona, Love held the title of Sports Director, among others, for KIDSSPORTS in Salisbury, NC. He developed and oversaw all sports programs for youth and adults, while serving as a physical education instructor for children ages 4-12.

A native of Cheraw, SC, Love played football and baseball on the collegiate level at Catawba College in Salisbury, NC. He graduated with a degree in Recreation in 2000 and earned his Master’s degree in student affairs with an emphasis in counseling from Clemson University in May of 2008. Love is certified by the National Association of Speed and Explosion and resides in Seneca, SC.