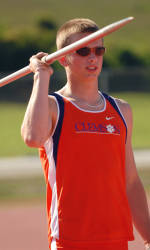 Lomnicka posted the second-best mark in Clemson history in the hammer throw. She had a toss of 202’9″, second only to former NCAA champion Jamine Moton. Lomnicka was an All-ACC performer indoors in the 20-pound weight throw.

Pauga topped his personal best in the javelin with a mark of 206’7″, also a regional qualifying standard. Pauga is in his second year with the Clemson men’s team after transferring from Illinois-Chicago last year.

Alex Padgett had a solid start to his sophomore outdoor season. He placed third in the shot put with a mark of 52’10.75″. In the women’s javelin, school record-holder Linda Buchholz struggled in her first outing of the season. She was fifth with a throw of 130’4″. Finishing off Clemson’s results on Friday was Anastasia Wilson, who was eighth in the high jump (5’5″).

Members of the distance groups from Clemson participated in the Shamrock Invitational at Coastal Carolina late Friday. Leading the way were the 4x800m relay teams, with the men finishing first and women second. The women’s group of Joanie Castagno, Candice Sapp, Stephanie Buffo, and Candice Johnson posted a time of 9:16.23. It is one of the top five times in school history for the event.

Individually, several members of Clemson’s team competed in the 5000m race Friday evening. Taylor Hughes was eighth and Lauren Klas came home ninth. In the men’s competition, Shane Reighard was fifth with a time of 15:27.70.

The teams return to action Saturday for the final day of competition at both sites.