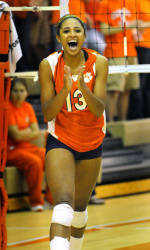 GREENSBORO, NC – Clemson’s Lia Proctor has been named the ACC Volleyball Player of the Week for her performance against #15 Florida State and the Tigers’ sweep of Miami on Saturday. The honor is the first of the senior’s career, as she registered 35 kills and 5.00 kills/set, while also notching 19 digs.

Proctor had 22 kills and 10 digs against the nationally-ranked Seminoles, her 12th double-double of the season, which ranks second in the conference. She followed that with 13 kills and nine digs, and four blocks against Miami. Proctor ranks third in the ACC in kills per set at a 3.79 mark.

This marks the second consecutive week that a Tiger has been honored. Sandra Adeleye became only the second freshman ever to earn the award in her rookie campaign last week. Additionally, Kelsey Murphy earned the honor earlier in the season, giving the Tigers three Player of the Week honors on the season. That is the first time since the 1999 season that three different Tigers earned the honor in the same season.

Clemson will return to action on Friday, November 20 when it hosts Virginia Tech at 7:00 p.m. in Jervey Gymnasium in Clemson, S.C. The Tigers will then welcome Virginia on Saturday, November 21 for a 7:00 p.m. match. Note that this is a time change from the previously scheduled start time of 6:00 p.m.