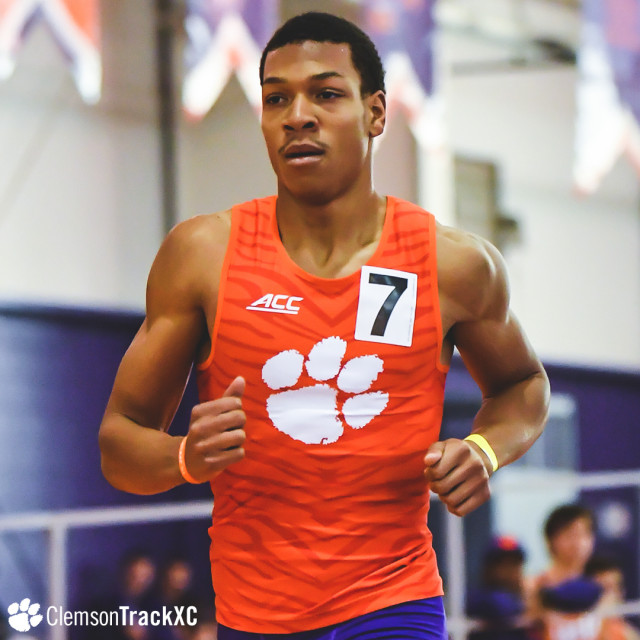 COLLEGE STATION, Texas – Clemson middle distance runner John Lewis ran his second-best time of his career Friday evening at the 2018 NCAA Indoor Track & Field Championships, which were held at Texas A&M’s Gilliam Indoor Track Stadium. The junior placed second in his heat, and fifth overall in the 800m preliminaries, turning in a time of 1:47.90 to advance to Saturday’s final. Lewis, who has now garnered First Team All-American status for the first time in his career, is scheduled to compete in Saturday’s 800m final at 6:30 p.m. (EST).

Senior Cordell Lamb turned in his third-best career time in the 200m dash, posting a mark of 20:98 to place 14th overall. As a result of qualifying for the 2018 NCAA indoor championships, the senior earns his first career All-American accolades, earning Second Team honors. In the men’s 400m dash, senior Jeffrey Green pulled up early in the first lap on what looked to be a hamstring cramp. Despite not finishing the race, Green will go down as one of the most decorated long sprints competitors in Clemson history. The senior closes out his indoor career as a three-time ACC 400m dash champion and holds program records in the men’s 300m, 400m and 600m dashes.

Clemson resumes competition at the 2018 NCAA Indoor Track & Field Championships Saturday at 6 p.m. (EST) as Jeremiah Green will look to compete for a national title in the men’s triple jump. Lewis is set to compete in the men’s 800m final at 6:30 p.m. (EST), while the women’s 4x400m relay concludes the championship meet at 7:55 p.m. (EST). Coverage on ESPN3 resumes at 5 p.m. (EST) Saturday. Live results can be accessed on clemsontigers.com.