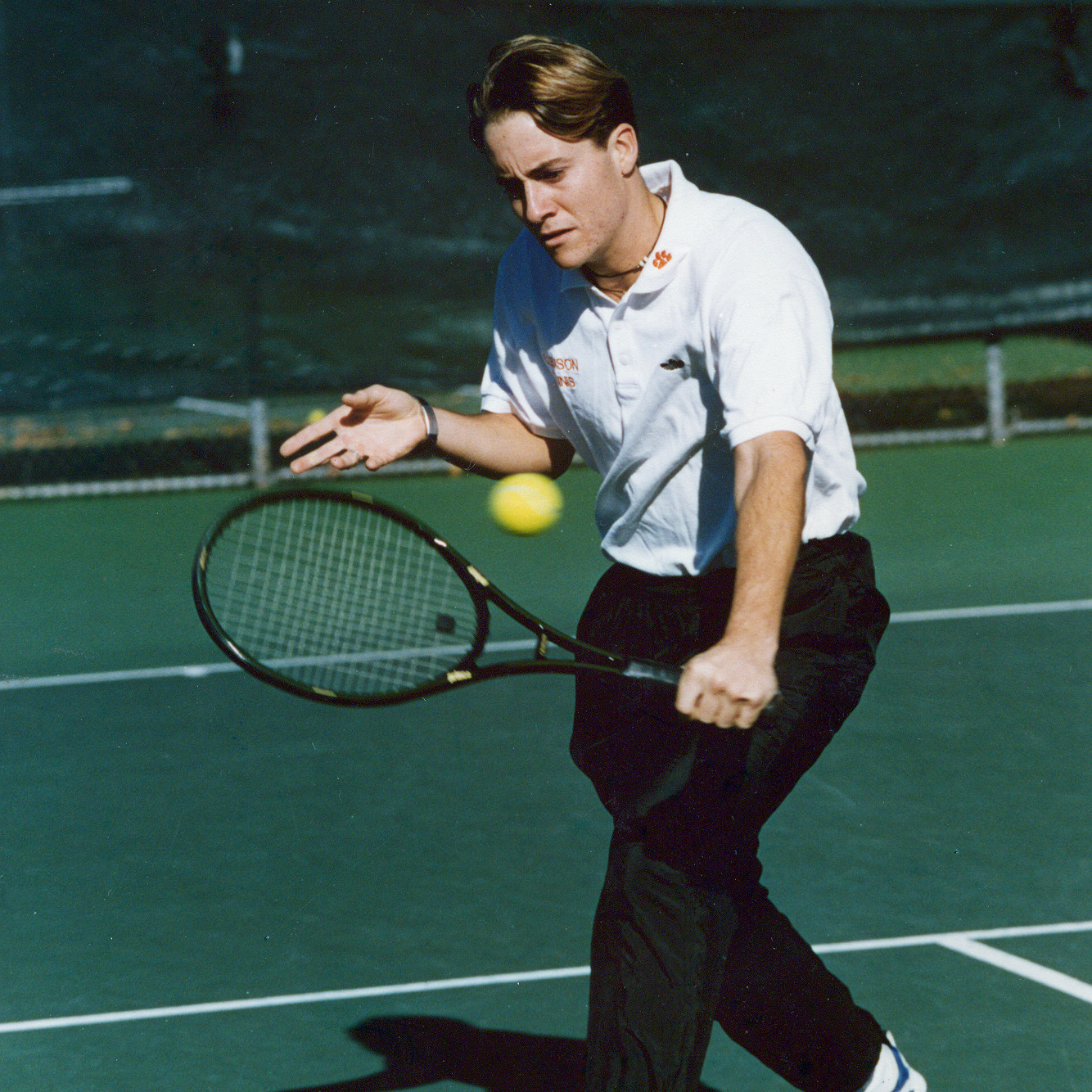 Note: The following appears in the May issue of Orange: The Experience, arriving in the mail for IPTAY members this week.

Former Tiger men’s tennis player Mitch Sprengelmeyer made the most of his Clemson career from 1994-1997, athletically and academically.

His dedication paid off, as it was a springboard for other outstanding achievements to come his way. He played tennis professionally and later graduated from Duke Law School, and is now a practicing attorney in North Carolina. His accomplishments were only fitting, after an outstanding career at Clemson.

“Tennis has always been a big part of my life, since my father started me playing at the age of two,” he said. “I knew if I came to Clemson and played for Head Coach Chuck Kriese that I would develop and become the best tennis player that I could be. Coach Kriese was known for developing players. He was a great coach, and I am so glad that I had the opportunity to play for him.”

At Clemson, Sprengelmeyer was a two-time All-American on the court — 1996 in doubles and 1997 in singles. As a senior in ’97, he was named ACC Player of the Year as at No. 1 singles and No. 1 doubles. He led the Tigers to the ACC Championship and was also a CoSIDA Academic All-American.

Sprengelmeyer’s hard work and dedication to the game did not go unrewarded. He won the ITA Senior Player of the Year (tennis equivalent of winning the Heisman Trophy) and the Van Nostrand Memorial Award that is given to a senior player showing the most promise as a professional. Sprengelmeyer was the first player in history to win both national awards.

“Winning both awards was a big moment in my career,” said Sprengelmeyer, who grew up in Florence, S.C. “I really appreciated the recognition, not only for myself, but my team as well, as we all worked hard and were dedicated to be the best we could be. When I won those awards, I won them for the team as well.

“The most memorable moment for me at Clemson was winning the ACC championship my senior year. That was amazing. We worked so hard, and being able to beat Duke to win the championship was great. I remember Bruce Li won a big match and clinched the title for us.”

Currently a structural finance securitization lawyer for Katten, Muchin & Rosenman, he resides in Charlotte, N.C. He deals with commercial real estate acquisitions and dispositions. He also deals with the leasing and operations of properties, as well.

He currently plays tennis in the Charlotte pro league, which consists of college and professional players who have played on the tour.

Sprengelmeyer and his wife, Kelly, have three children, Anna-Blake (9), Barr (7) and Garland (3). The two met at Clemson, when she was a graduate assistant in Clemson’s athletic training room.

“Tennis is still a big part of my life and work. I still play in the local league, and I also play with clients as well.”

He also has fond memories as a professional.

“Some of my big pro moments were when I played in all four grand slam tournaments,” he said. “I remember playing a mixed doubles match against Martina Navratilova on the No. 1 court at Wimbledon.”

Clemson Athletics is still a big part of the Sprengelmeyers’ lives.

“We belong to IPTAY and attend as many football games as possible,” he said. “I attend the tennis reunions as well. Just like tennis, Clemson is a big part of my family. It’s a great place, and I like to come back as often as I can.”